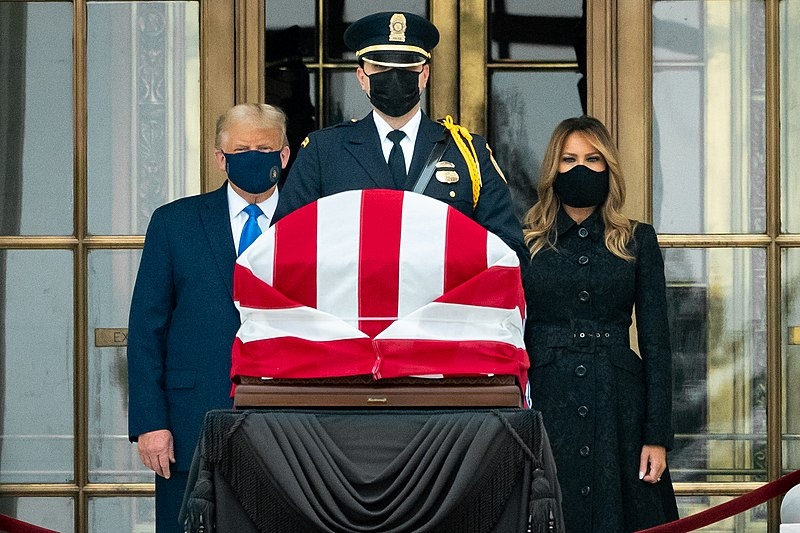 The passing of Justice Ruth Bader Ginsburg has led to a partisan clash as to when her replacement is to be selected, with Donald Trump pushing to nominate a new Justice by the weekend. As he and first lady Melania Trump visited the Supreme Court to pay their respects to Ginsburg, they were greeted with boos from the crowd.

Ginsburg is currently lying in state at the Supreme Court and many lawmakers from both sides including the American public stopped by to pay their respects to the feminist icon also known for her liberal views. Melania and her husband arrived at the Supreme Court, entering through the back door and exiting through the front to view Ginsburg’s coffin. The Trumps were wearing face masks as they stood near the coffin, staying there for 11 minutes before returning to the White House.

Thousands of mourners present were booing the president and the first lady, with some chanting “Honor her wish,” referencing Ginsburg’s last wish that she relayed to her granddaughter. Ginsburg wished that she only be replaced following the precedent the Republicans set in place back in 2016 when the selection of a new Supreme Court Justice be done after the elections. Trump has ignored the request, dismissing it as a hoax made up by Democrats without providing proof. Senate Majority Leader Mitch McConnell, who blocked Obama back in 2016 in nominating Merrick Garland, also reversed his position, vowing to confirm whoever Trump nominates.

Mourners were also chanting “Breonna Taylor,” the Black woman who was shot and killed by police officers. The recent verdict on the officers has sparked protests once again as no officer was convicted and charged.

Previously, Melania’s former friend and aide Stephanie Winston Wolkoff has revealed the simmering rivalry between Melania and her stepdaughter Ivanka Trump. Ivanka is often touted as someone who could potentially run for office, following her father’s footsteps, and a source close to the book revealed how the first lady would snub Ivanka’s political aspirations.

“Melana would roll her eyes whenever she heard Ivanka ramble on about her grand plan on becoming America’s first female president with Jared by her side. Jared would ultimately chime in with ‘she’s got what it takes, she’s a born leader, the people would love her, look at her,’ and Melania would mumble no thank you,” said the source.