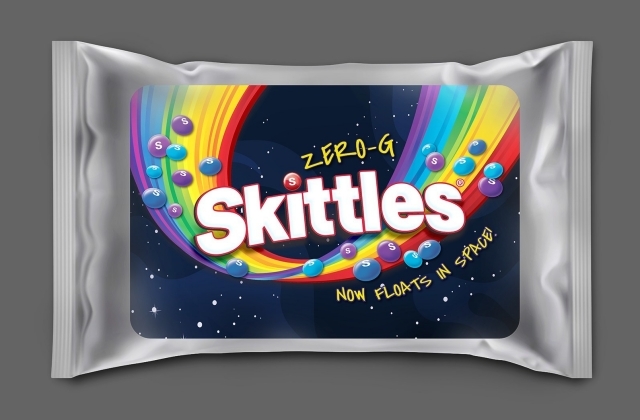 Skittles wants to brag about its new accomplishment of having gone to space, and to do this, the candy maker is releasing the Zero-G. This is the limited edition of the colored, fruity flavored candy.

As per Fox Business, Skittles is launching its Zero-G bag of candies, but this will only be available for a limited time. The packaging has been chosen to match the space theme, which is aluminum. Inside, the candies are said to be purple and blue in color.

Unlike the usual colorful candies inside each Skittles pack, the new Zero-G only has two colors, but there will be three flavors. Based on the report, fans will enjoy raspberry, berry punch, and pineapple passionfruit flavors.

The Zero-G Skittles will be released to stores nationwide this coming summer. And apparently, it was named Zero-G to refer to the zero-gravity outside of the Earth. In its advertisements, the brand boasts of its milestone with the addition of the tagline “floats in space.”

The Skittles in space and its thanks to Jeff Bezos

Skittles is celebrating its milestone of going to space because it was the brand’s first trip outside of the planet. Mars Wrigley proudly presents the Zero-G as it was a moment that may never happen again.

"SKITTLES is always looking for ways to surprise fans, both earthlings and extraterrestrials, with shocking innovation," Mars Wrigley, senior brand manager for Skittles, Fernando Rodrigues, said in a press release. "We're thrilled to bring better moments to fans by marking SKITTLES' first trip to space with limited edition packs and look forward to pushing the boundaries of confectionery space exploration."

Meanwhile, Skittles was able to go to space, and it was all thanks to Jeff Bezos. The billionaire and founder of Amazon brought the snack candies with him when he was launched to the edge of the Earth via his own space shuttle, the Blue Origin.

As can be seen in the video, Bezos tossed Skittles to his companion, Daemon, and the teen did the same. The trip to space took place on July 20.