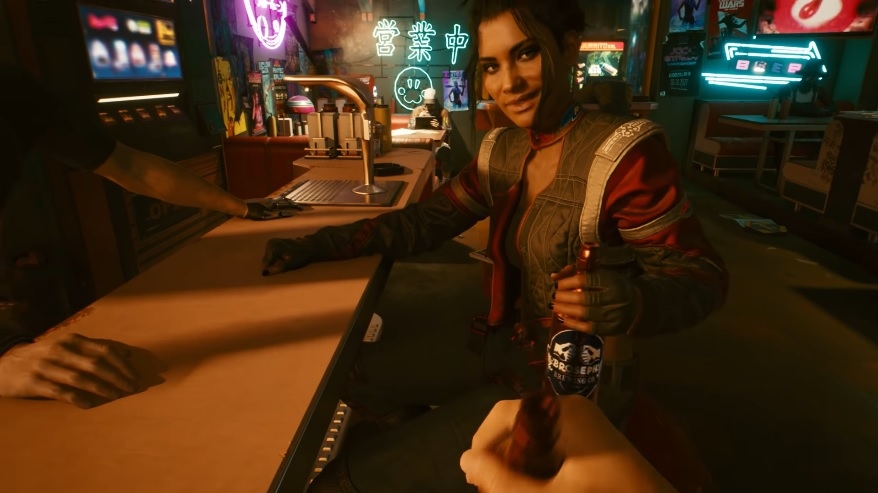 The “Cyberpunk 2077” patch 1.2 delivered hundreds of much-needed gameplay fixes and improvements, but it may have also revealed an upcoming DLC focused on the romantic relationship of V and Panam Palmer. A long list of dialogues between the character was found in a datamine of the game’s latest major update.

Reddit user stndn shared a significant amount of codes from the “Cyberpunk 2077” patch 1.2 files suggesting that a major storyline focused on Panam could be introduced in the game. The datamine showed dialogues between Panam and V, mostly exchanged through texts.

The source emphasized that the files are “new and exclusive” to “Cyberpunk 2077” patch 1.2. In one of the dialogues, Panam and V exchange sweet conversations where the former tells the playable character, “You’re surrounded by friends. And you’ll always have me :)”

Another set of dialogues suggests Panam and V could share a more intimate relationship. One of Panam’s lines is labeled “hot photo text” where she tells V, “What are you up to? I’m wrapped up in my blankets and thinking of you.”

The dataminer also found several Panam lines where the former Aldecaldos member talks about Judy. The interesting bit is there appear to be options for a “jealous text” and a “not jealous” response when Panam talks about Judy. It is unclear yet if Panam and Judy are going to have interaction outside of phone messages, but this possibility is enough to excite “Cyberpunk 2077” as the two characters are some of the most favorite NPCs in the game.

What do these Panam dialogues mean for ‘Cyberpunk 2077’?

“Cyberpunk 2077” fans are speculating that the dialogues could be more than just gameplay add-ons and they might be part of a full DLC or even an expansion. Considering the dialogues were reportedly just added in patch 1.2, that is one possibility.

Panam is one of the NPCs with an interesting backstory and involvement in the development of V’s story, which explains why she got the attention of many “Cyberpunk 2077” players. Meanwhile, CD Projekt Red has reiterated that the first DLC is still slated to launch this year but other details remain unknown.