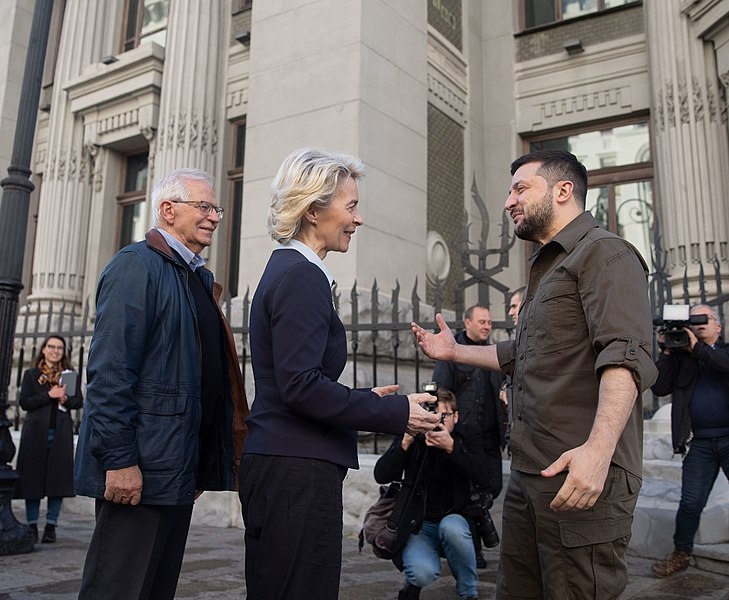 The war goes on between Ukraine and Russia as the conflict is approaching its second month. In a show of support, European Commission chief Ursula von der Leyen visited Ukraine to meet with Ukrainian President Volodymyr Zelenskyy.

Von der Leyen is the first Western leader to visit the affected region of Ukraine, seeing 20 bodies that were exhumed from a mass grave and lit candles in a church for the victims of Russian atrocities. The European Commission president then said, “the whole world is in mourning after everything that happened here.”

“We have seen the cruel face of Putin’s army, we have seen the ruthlessness and the cold-heartedness with which it has occupied the city,” said von der Leyen.

“It was important to start my visit in Bucha. Because in Bucha our humanity was shattered. My message to the Ukrainian people: Those responsible for the atrocities will be brought to justice. Your fight is our fight,” von der Leyen tweeted.

Von der Leyen later met with Zelenskyy in Ukraine’s capital Kyiv to assure him that the European Union is in support of Ukraine. Zelenskyy thanked von der Leyen for the latest set of sanctions on Russia by the EU and also reiterated his call for harsher sanctions on Moscow, as “Russia does not want to understand anyone and anything.”

Russia continues to bombard cities and towns in Ukraine to this day. Among the latest places that were struck by Russian missiles was an airport in Dnipro, injuring five emergency workers. A Russian missile also struck a building in the Pavlohrad district as emergency workers were looking through the infrastructure that was hit in the town of Zvonetsky.

Valentin Reznichenko, the governor of the central Dnipropetrovsk region, said Sunday that there is “nothing left” of the airport in Dnipro following the Russian attack, including the infrastructure surrounding the airport.