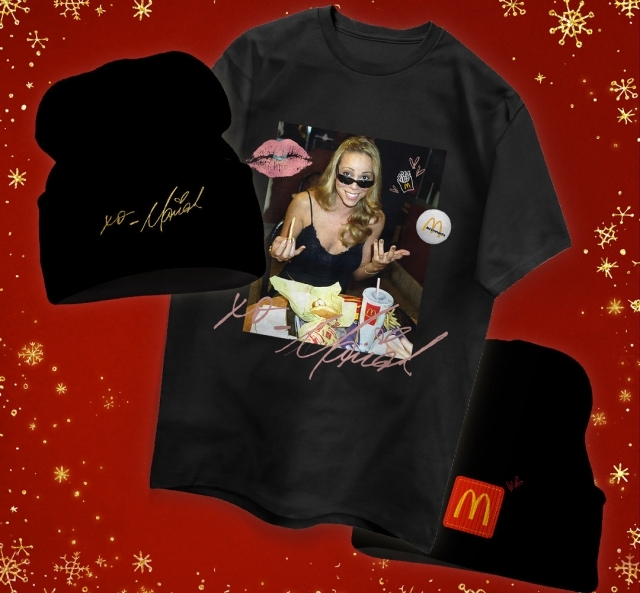 McDonald's keeps the surprises coming for the holidays, and this time, it unwrapped a new line of merchandise featuring Mariah Carey. The items are just one of the offerings to spread holiday cheer before the fast-food chain finally unveils the upcoming Mariah Menu.

McDonald's and the "All I Want for Christmas is You" singer has collaborated to celebrate the holidays with a new menu line. And while customers are waiting for Mariah's McDonald's menu, the restaurant announced on Tuesday, Dec. 7, it will be releasing limited-edition Mariah-themed items.

The merchandise items were designed to go with Mariah Menu, and customers are already clamoring to have one since these will also be given for free, as per People. The items include a short-sleeved black t-shirt and a beanie with two designs.

The first beanie has the McDonald's logo on the front, while the second design features the Grammy-awardee singer's signature that was embroidered in gold fonts. As for the t-shirt, it has the singer's old photo where she was enjoying her McDonald's meal.

The limited-edition Mariah x McDonald's beanies and t-shirts are for free, and only the first 10,000 customers and fans who will purchase the Mariah menu via the McDonald's app on Dec. 15 and Dec. 21 will receive the freebie merchandise.

The beanie will be offered for free on Dec. 15, while the t-shirts will be given away on Dec. 21. What's more, customers only need to spend a minimum of $1 on the Mariah Menu line to claim their merchandise.

While the singer's menu was already announced last month, it will officially be unveiled in McDonald's stores on Dec. 13. Under Mariah's menu, customers can buy various food items - from Big Mac to the cheeseburger, apple pie, and chocolate chip cookies.

"To bring even more holiday cheer to the Mariah Menu, we're decking out fans and celebrating Mariah's longtime love of the Golden Arches with exclusive beanies and t-shirts," McDonald's stated in a press release. "Customers can order the Mariah Menu in the U.S. starting on Dec.13, featuring a different free item** each day with a $1 minimum purchase on the McDonald's app."