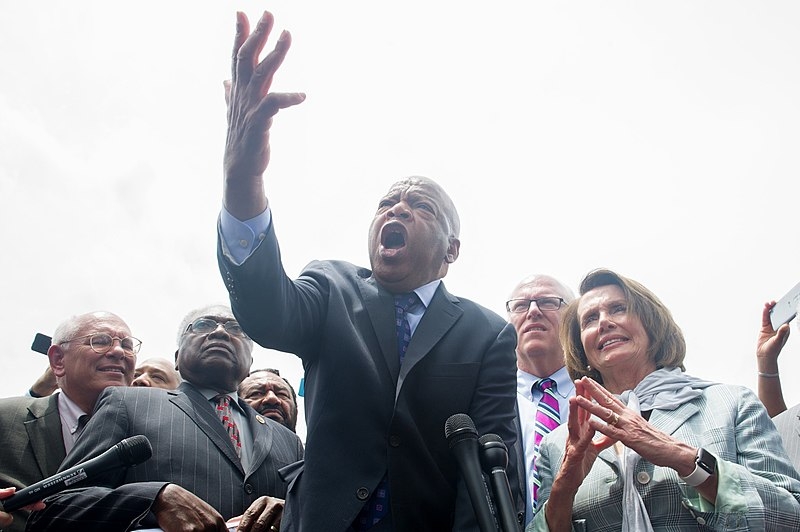 The US Navy is set to bring in a new batch of ships, the newest of which is named after the late congressman and civil rights icon John Lewis. Over the weekend, House Speaker Nancy Pelosi joined a bipartisan delegation to take part in the ceremonies.

Pelosi was among a bipartisan delegation that was present in the ceremony christening the USNS John Lewis, a year after the Georgia Congressman passed away in 2020. Measuring 746 feet long, the USNS John Lewis is the first among a new class of navy ships operated by the Navy Sealift Military Command. The Navy looks to purchase 20 of the John Lewis-class ships.

The new ship was built at the General Dynamics NASSCO shipyard in San Diego, California. The lawmakers were with top military officials at the christening ceremony. Pelosi also spoke at the event, recalling the life of Lewis, who was among the Freedom Riders during the Civil Rights Movement, who would later be elected Congressman in 1986.

“Personally, it is my honor to honor our dear friend and I know in saying that that I speak for my colleagues who are all here,” said the California Democrat. Pelosi also praised the military that is present at the event and those that helped build the new navy ship. In her remarks, Pelosi also said it was fitting to name the new US Navy ship after the late congressman as Lewis “was a warrior.”

Meanwhile, Pelosi also weighed in on a federal court’s ruling in favor of Republican-led states that were seeking to dismantle the DACA program or Deferred Action for Childhood Arrivals. Pelosi took to Twitter, saying that Democrats are calling on their Republican counterparts to join them in “respecting the will of the people” in ensuring that Dreamers - those under the DACA program - are provided a path to citizenship.

“Today’s wrongly-decided ruling brazenly flouts the law & precedent, as it casts a cloud of fear & uncertainty around #Dreamers, who are a pride of our nation. Democrats will continue to press for any & all paths to ensure that the Dream & Promise Act becomes the law of the land,” tweeted the House Speaker.