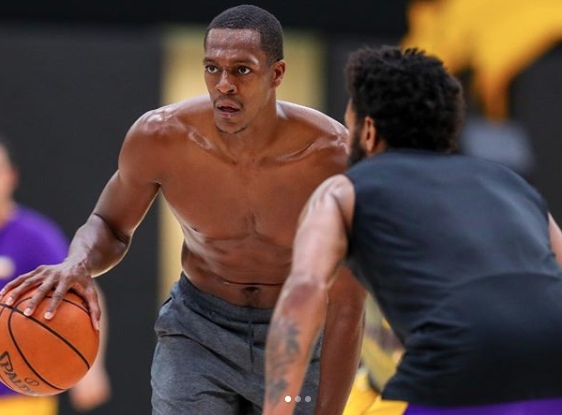 Rajon Rondo will soon be rejoining the Los Angeles Lakers inside the NBA bubble at the Disney World in Orlando, Florida three weeks after leaving it to undergo surgery for a fractured right thumb.

This was confirmed by LA Lakers head coach Frank Vogel.

The LA Lakers point guard will travel to Florida Wednesday and will continue to undergo rehab for his right thumb just near the NBA bubble, according to ESPN.

Rondo's injury was discovered on July 12 after the team's second practice inside the NBA bubble.

He underwent surgery on July 16 and was estimated to be out between six to eight weeks to give time for the injury to heal.

Vogel though did not give a new timeline on how long Rondo will be out or when exactly he will be rejoining the team.

Back when Rondo's injury was discovered, the head coach had said that he is hoping they can have the 34-year-old cager back by the start of the Playoffs.

He said Rondo will be one of their key players during the Playoffs. He takes over LeBron James as point guard when James takes a rest and still plays the number 1 position when they are both on the floor.

Rondo is hoping to get his second NBA championship with the LA Lakers. He already has one ring as part of Boston Celtics who took the title in 2008.

In the 48 games that he has played for the team, he has started in three of them. This is his second season with the Lakers who got him in 2018 shortly after they signed up James.

This season, he has averaged 7.1 points, five assists and three rebounds.

In his absence, JR Smith, Alex Caruso and Dion Waiters played in his position.

Despite already ensured as the top seed following their 116-108 thrashing of Utah Jazz, Vogel said he has no intention of giving his starters rest in their remaining games against the Oklahoma City Thunder and the Houston Rockets.

This because according to Vogel, they still have a lot of areas to improve on before they can say that they are ready to win the big games. He added that they are still not at the level that they want to reach.

The LA Lakers are the favorites to win the title, especially with the tragic death of one of its stars, Kobe Bryant, last January.