How the major parties stack up on industrial relations policy 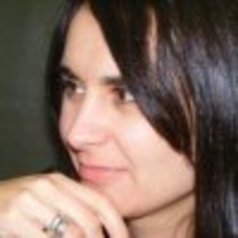 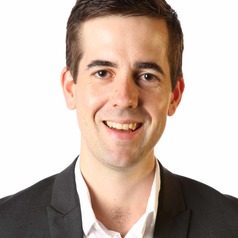 Today we kick off a four-part election series on wages, industrial relations, Labor and the union movement ahead of the 2019 federal election. You can read an analysis of Labor’s living wage policy here.

Industrial relations is in the DNA of Australian politics: it is the defining policy issue that has traditionally distinguished Labor from the Coalition.

Industrial relations issues have featured prominently in recent election campaigns, with Australian Workplace Agreements (AWAs), WorkChoices and union governance being the subject of fierce contestation between the major parties. However, this election the policy contrast is especially evident.

While the policies of the major parties have always differed, over the past 30 years there was a neoliberal consensus on economic policy that in some respects extended to industrial relations.

For instance, the Fair Work Act implemented by the Rudd government reversed some but not all elements of Howard-era industrial relations policies. It largely maintained constraints on trade union power.

But this consensus is fracturing, as reflected in the policy settings of the two major parties. The Coalition has held steadfast to the idea that industrial relations and labour market issues are best left to the logic of the market. From this perspective, a strong economy enabled by low taxation and minimal government intervention results in employment and wage growth.

In contrast, and in light of the evident decoupling of economic growth and wages growth, the ALP has taken a more interventionist stance. This reflects less confidence in market mechanisms alone to solve persistent issues such as gender inequality, low pay and the proliferation of precarious work.

Much of the Liberal and National parties’ policy platform focuses on what the Coalition has achieved in office. Most prominent is the focus on the Coalition’s job record, particularly its claim to have created 1.3 million jobs since it was first elected in September 2013.

The Coalition highlights recent job growth among younger workers, increased workforce participation among women and the creation of full-time jobs. This is despite persistent challenges relating to gender equality at work, unemployment and under-employment among young workers and a prevalence of insecure and non-standard work arrangements.

Very little is said explicitly about wages, job security and other “core” industrial relations issues. One explanation for this could be memories of the “WorkChoices election” of 2007 when the Howard government’s weakening of worker protections led to its removal from office.

Or it could be because of an ideological view that removing market constraints, particularly for small business, will lead to improved conditions for workers. This is a strong theme in the Coalition’s platform: it claims that lower taxes are “a critical part of our plan to deliver a strong economy and record job creation”.

The Coalition also points to its record in “tackling union lawlessness”, particularly through the establishment of the Australian Building and Construction Commission. A key aspect of the Coalition’s policy platform is to highlight Labor’s perceived weaknesses through its links with the union movement and also the potential impact of climate change policies on employment in carbon-intensive industries.

But it’s hard to see this resonating much among voters, who for the past two decades have seen unions are having much less power than big business (see below).

Voters’ perceptions of the power of trade unions and big business, Australia, 1967-2016 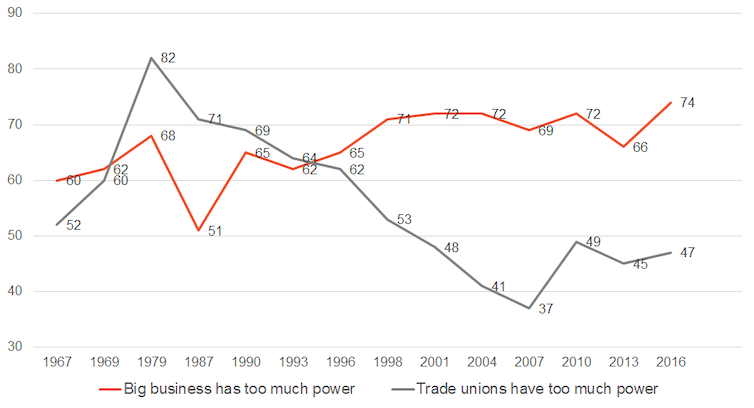 Reflecting a renewed enthusiasm for policy aimed at challenging the free rein of the market, the Labor Party has announced a suite of interventionist measures. Some appear aimed squarely at amending the Fair Work Act – for example, legislating to prevent employers using agreement termination to revert to award wages and conditions, and to impose higher penalties for wage theft.

However, the bulk of Labor’s announcements relate to three themes: the problems of ongoing wage stagnation and income inequality, job insecurity and gender equity at work.

Key to the ALP’s wages policies is a commitment to develop a “living wage” to keep working people out of poverty. Details of how this will be calculated will likely be left to the Fair Work Commission.

Another headline announcement by the ALP, easier conversion from casual to permanent work, draws a connection between the prevalence of insecure forms of work and historically low wage growth.

Commitments to ensure labour hire workers receive the same pay as those who are directly employed and an undertaking to “make sure workers in the gig economy are paid properly and not used to undermine Australian wages, including by changing the legal test for sham contracting” suggest enthusiasm for a recalibration of labour market regulation away from free-market logic.

This is reinforced by a broader set of policies focusing on the eradication of modern slavery, the inclusion of superannuation in the National Employment Standards and reporting requirements for CEO pay in listed companies.

Gender equity at work policy provides a stark area of contrast between the two main parties. The ALP has pledged A$400 million towards closing the gender superannuation gap, a 20% increase in pay for early childhood educators and prioritising gender equity in the Fair Work Act and in the work of the Fair Work Commission.

Linking gender equity to wage stagnation, Labor has announced it will reinstate penalty rates, the loss of which has had a disproportionate impact on female-dominated industries such retail services and hospitality.

The small-target approach of the Coalition to industrial relations during this election campaign is very difficult to compare to the comprehensive suite of policies released by the ALP. This is partly a result of the inherent nature of election campaigns – the incumbent seeks to defend its record and the challenger to present a convincing agenda for change.

What the industrial relations policies of the major parties most starkly reveal is a Coalition that maintains its conviction that fiscal measures such as tax cuts are the best way to “regulate” the labour market, and a Labor Party that’s looking to curb market excesses and redress what it sees as market failures.

This provides a stark choice for voters.