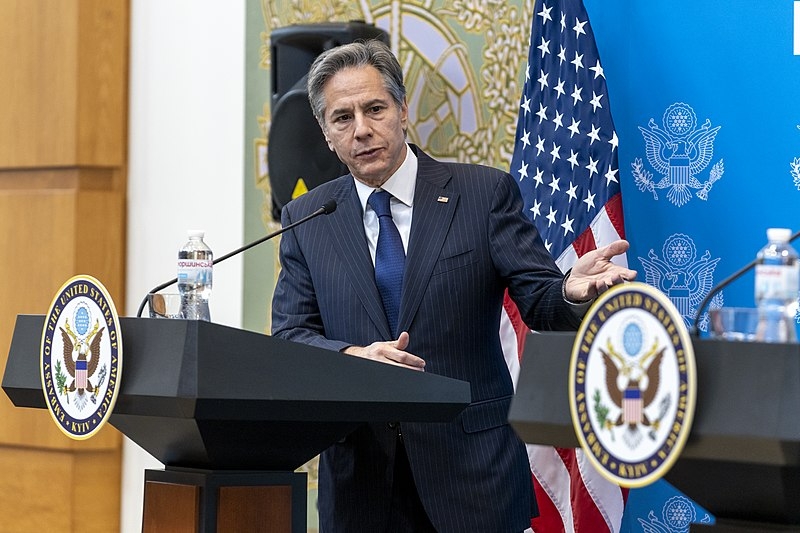 The US is continuing diplomatic efforts to scale down the tensions between Russia and Ukraine. US Secretary of State Antony Blinken warned during his visit to Kyiv that Russia may decide to launch an attack on short notice.

Blinken traveled to Ukraine this week as part of another diplomatic push to de-escalate tensions with Russia over Ukraine following the previous negotiations that did not lead to a breakthrough. Speaking at the US Embassy in Kyiv, Blinken said he hopes Russia would abide by a diplomatic and peaceful approach and warned that Russian President Vladimir Putin could launch an attack against Ukraine on short notice.

“As you all know very, very, well, we have been engaged in the past couple of months in an intense focus on Ukraine because of the significant buildup we’ve seen of Russian forces we’ve seen near the Ukrainian border,” said Blinken, who described the buildup of Russian troops at the border it shares with Ukraine as having taken place unprovoked.

Tens of thousands of Russian troops have been deployed near the border Russia shares with Ukraine, with many of Kyiv’s allies concerned that Russia may try and carry out an invasion. Russia also moved more troops into Belarus this week ahead of the planned joint military exercises that will take place next month.

During Blinken’s visit to Kyiv, he will meet with Ukrainian President Volodymyr Zelensky. Following the visit to Ukraine, Blinken will then travel to Berlin to speak with allies before heading to Geneva, Switzerland, to meet with his Russian counterpart, Sergei Lavrov.

Moscow has since rejected new discussions on Ukraine this week, insisting that the West must respond to the demands it has made despite another push for negotiations. Russia has insisted that the US and NATO take its sweeping demands seriously. The demands include permanently barring Ukraine from joining the alliance.

“We are now awaiting responses to the proposals – as we were promised – in order to continue negotiations,” said Lavrov during a joint press conference with German Foreign Minister Annalena Baerbock.