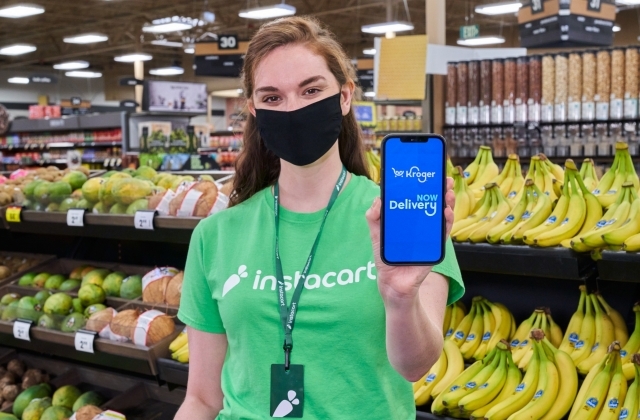 Kroger inks a deal with Instacart to offer faster delivery service to its customers. With the partnership, grocery items purchased in its store can get to the customers’ homes as fast as 30 minutes.

It was noted that Kroger and Instacart’s partnership was announced at a time when people are mostly doing their grocery shopping online and want their purchases to be delivered quickly. To satisfy its customers it launched the "Kroger Delivery Now'' nationwide to be able to provide a 30-Minute delivery service via Instacart. This is said to be a “first-of-its-kind” virtual convenience store.

"Kroger Delivery Now is a differentiated solution in the e-commerce industry, not just the grocery sector. Our new service provides customers with one more way to shop with us and addresses the importance of convenience and immediacy,” Kroger’s chairman and chief executive officer, Rodney McMullen, said in a press release. “Joined by Instacart's unrivaled fulfillment model and last-mile technology to provide our customers with anything, anytime, anywhere without compromise, this service reaches up to 50 million households and it's an expansion of our thriving e-commerce model.”

The Wall Street Journal reported that Kroger tested this 30-minute delivery service about two years ago. However, at that time, McMullen said that they found it difficult to expand the service with only its staffers. They decided that it will be easier to start and develop the service with Instacart and now the deal is done.

With the availability of Kroger Delivery Now, Instacart has opened the Convenience Hub on its Instacart Marketplace. Through this, customers can now shop anytime and on any day of the week since it will operate 24 hours a day and seven days a week. For Instacart Express members with orders of more than $10, it will also offer free Priority Delivery in as fast as 30 minutes.

Meanwhile, as per CNBC, Kroger also announced 20,000 job openings in the company. The retail company revealed that the biggest challenge it is currently facing is staff shortage.

In an interview, Rodney McMullen said that they are aggressively hiring workers from everywhere and want to find talented people. The new hires will be offered many perks and higher wages in an effort to fill in all the vacancies in the company.