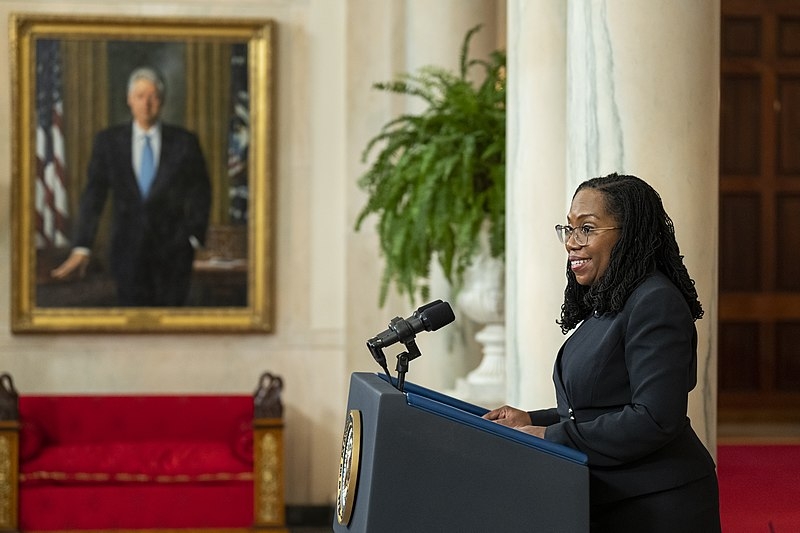 This week, federal judge Ketanji Brown Jackson was sworn in as the newest associate justice of the US Supreme Court. Jackson is succeeding retiring liberal Justice Stephen Breyer, who also officially retired the same day.

Jackson was officially sworn in Thursday as the newest Supreme Court Justice while also making history as the first Black woman to serve on the highest court of the country. Jackson succeeded retiring liberal Justice Stephen Breyer, who also officially retired Thursday.

Jackson’s swearing-in comes months after she was confirmed by the Senate at a 53-47 vote back in April. Jackson was previously appointed by President Joe Biden and confirmed by the same Senate last year to the DC Court of Appeals after serving eight years as a federal judge.

“I am glad for America,” said Breyer in a statement. “Ketanji will interpret the law wisely and fairly, helping that law to work better for the American people, whom it serves.”

Jackson will participate in arguments on cases when the high court starts a new term in October, joining a liberal minority against the court’s currently Conservative majority of 6-3.

Breyer’s retirement and Jackson’s swearing-in also come at a time when the high court, especially its Conservative majority, has been under heavy scrutiny following its recent rulings overturning Roe v. Wade, expanding the rights of firearm owners, limiting the federal government’s authority to regulate carbon emissions, and expanding religious liberties.

Another case that the court is set to take on is whether state legislatures have the authority to ignore courts on election rules if found to be unconstitutional.

The striking down of the landmark abortion ruling suggests that Chief Justice John Roberts has lost control of the Supreme Court and could also see his legacy tarnished because of it, according to two legal scholars.

University of Texas law professor Stephen Vladeck told Politico’s Josh Gerstein that the overturning of Roe v. Wade was the “capstone piece,” showing very little proof that the court is still Roberts’ court, noting that the Chief Justice is essentially powerless due to the internal conflicts between both sides.

American University historian Stephen Wermiel said the court’s overturning of Roe v. Wade is “the most important decision of his tenure as chief justice and he’s not part of it.”