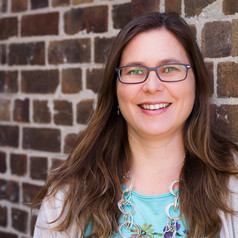 It’s the third period of Game 7 of the Stanley Cup playoffs and we’re trailing, badly. It’s time to pull the goalie and send out the top forward line. We don’t know if we can actually win, but we’re going to give it everything we’ve got.

In hockey-obsessed Canada, this is an appropriate metaphor to explain to the public why we need a bold and comprehensive strategy to tackle climate change. We’re running out of time to avoid catastrophic levels of warming and what we have been doing to reduce greenhouse gas emissions hasn’t been working.

It’s time to try something new, like The Pact for a Green New Deal, just launched by a large coalition of youth, workers, Indigenous leaders, artists and scientists. The plan would see Canada cut emissions in half in 11 years — in line with what the world’s scientists have demonstrated is necessary to avoid the worst impacts of climate change — and do so in a manner that will “leave no one behind.”

In proposing a Green New Deal, the Canadian coalition joins a growing movement that aims to dramatically shift the scope and speed of action to address the current ecological crisis.

While many will associate the Green New Deal with Rep. Alexandria Ocasio-Cortez, the freshman United States congresswoman from New York, the idea has actually been floating around for more than a decade. It’s also not an exclusively American idea.

It is, therefore, quite appropriate that the Green version was born in the U.K. with the formation of the Green New Deal Group in 2007. More recently, the shadow treasury minister, Clive Lewis (Labour), and U.K. Green Party MP Caroline Lucas jointly tabled a Green New Deal private member’s bill in British Parliament. 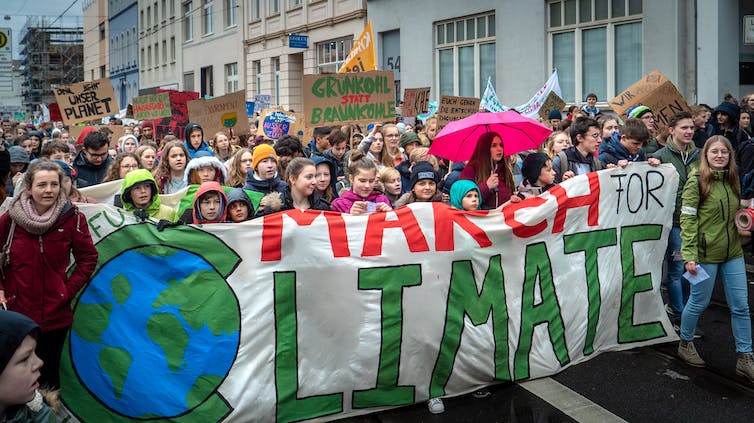 Students in participate in a climate march in Bonn, Germany in March 2019. Unsplash

Further afield, Korea launched a Green New Deal in 2009. In the same year, the United Nations Environment Program proposed a Global Green New Deal that largely focused on how G20 countries could maximize the environmental benefits of fiscal stimulus packages rolled out in the wake of the global financial crisis.

Recent calls for a Global Green New Deal are more ambitious in their suggestions for overhauling existing multilateral institutions that govern the global economy and making reparations to less developed countries.

If the idea of a Green New Deal has been around since 2007, why all the fuss about it now? And is everyone who is using the term actually talking about the same thing?

Ocasio-Cortez deserves much of the credit for making the Green New Deal both exciting and accessible. But there has also been an important shift in the scope of Green New Deal proposals, which may account for some of their increased popularity.

The main element that all Green New Deals share is that they are government-led. As noted in the Canadian proposal, “the federal government, in collaboration with all other levels of government and Indigenous Nations, has the capacity to pull this off.”

The focus on government leadership distinguishes Green New Deals from the neoliberal approaches such as creating markets or voluntary industry standards that have been the dominant response to the ecological crisis in most countries for the past 30 years. 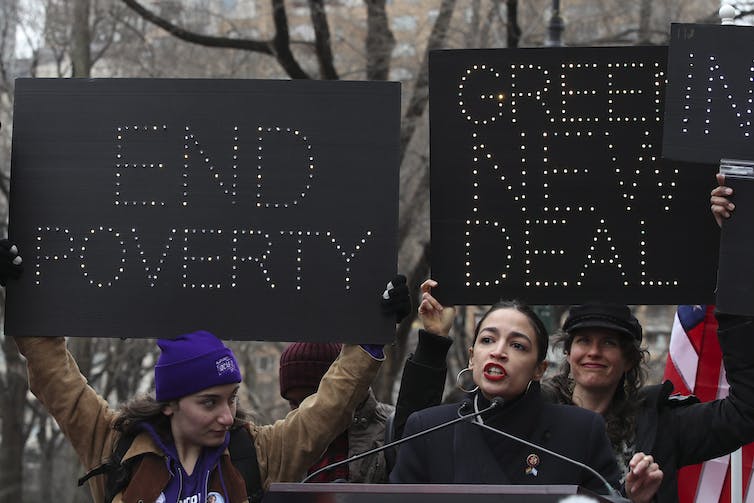 While Green New Deal proposals share a Keynesian interventionist economic model, they differ in other respects. Most of the Green New Deals proposed and implemented immediately following the global financial crisis in 2009 were based on the theory of ecological modernization and accordingly focused on investments in technological solutions.

Today’s proposals have a stronger focus on environmental justice; they call for investments in technology and infrastructure, but also highlight the structural inequality that is endemic in the current economic system and seek to address it.

For example, the U.S. Green New Deal includes universal health care and a job guarantee. The Canadian proposal has a strong focus on upholding the rights of Indigenous peoples, many of whom are at the front line of the resistance to contentious resource projects.

The idea of a strong role for government and justice-focused outcomes may get the neoliberal commentariat all hot and bothered, but their “Eek, socialism,” scaremongering doesn’t appear to be resonating with the public.

Arguably, supporters of the Green New Deal should be less concerned about the influence of the right-wing pundits railing against the idea and more about the real intentions of some industry leaders who are eager to get involved. The fossil fuel industry has recently shifted from a focus on manufacturing uncertainty about climate change to qualified support for carbon pricing and could change tactics again if there is an opportunity to secure public handouts through a Green New Deal. The nuclear industry is already positioning itself to benefit.

Keeping the Green New Deal both green and just will be an uphill battle. But it is one worth fighting.