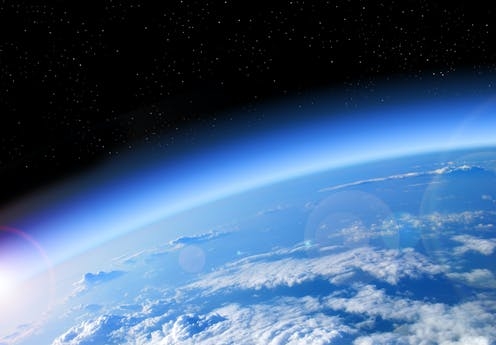 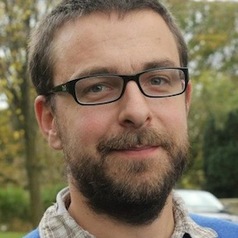 Spring 2060. In dark glasses, a wide sunhat and with what little exposed skin left caked in sun cream, a child stares at the woodland across from their house. It looks scraggly and stunted, and with far fewer leaves than in the old photos she has seen. Still, no time to dwell on it: there’s a UV index of 20 and she’s already spent five minutes outside.

Thankfully, this is not our future. Due to steps the world took in the 1980s to protect the ozone layer, a region of the upper atmosphere that absorbs the Sun’s harmful ultraviolet (UV) radiation, we have one less environmental problem to worry about.

In the mid-1970s, scientists realised that the ozone layer was being depleted by the growing use of chlorofluorocarbons (CFCs) as refrigerants and as propellants in aerosol cans, among other applications. With the 1987 signing of the Montreal Protocol, which was later strengthened by numerous amendments and ratified by 197 countries, the world phased out CFCs. Today, CFC levels in the atmosphere are falling and the ozone layer is beginning to recover. 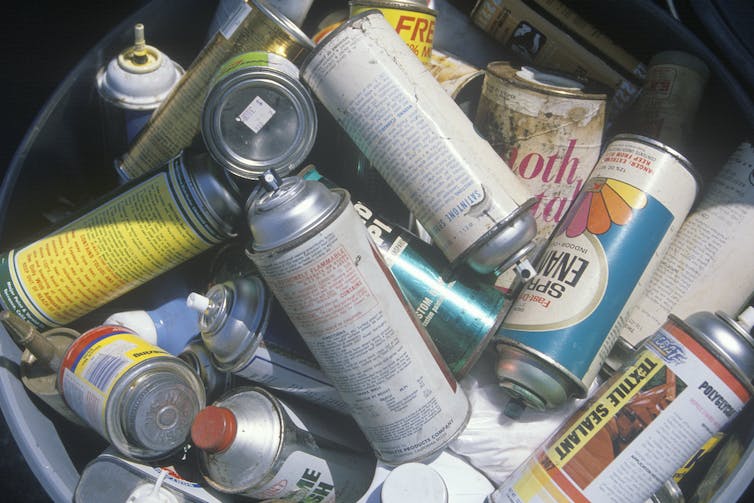 CFCs are nontoxic and nonflammable, making them useful in everything from hair care to household cleaning. Joseph Sohm/Shutterstock

But what if the Montreal Protocol was never signed? What would the world we managed to avoid have looked like? This is the subject of a new study led by me with an international team of collaborators.

In earlier research, scientists showed there would have been thousands more skin cancer cases in such a world, where the ozone layer is thinner and higher levels of UV radiation reach the planet’s surface. There would also have been additional climate warming, since CFCs, like carbon dioxide (CO₂), are also greenhouse gases, although far more potent. Our focus was on what could have happened to vegetation.

Like humans, plants are damaged when exposed to high UV levels. Plants absorb CO₂ as they grow, but when UV radiation increases by 10%, plants accrue 3% less biomass. Without the Montreal Protocol, we estimated that UV levels would have been 4.5 times higher on average globally than today at the end of the century. We also estimated that by 2050, European, Asian and North American UV levels would be higher than they are in the present-day tropics.

Overall, this means that more of the CO₂ humans emit would have remained in the atmosphere, rather than being locked up in plants and the soil. And this extra CO₂ would have led to more global warming.

A world without the Montreal Protocol

Using computer models to represent the climate, the atmosphere’s chemistry, vegetation and the carbon cycle, we simulated two worlds. The first assumed that the 1974 paper alerting the world to the dangers of CFCs was never published and their use grows at 3% a year. The second is a world where CFCs are controlled and the ozone layer recovers, the world we live in now and are on track to inhabit.

Apart from the CFCs, the two simulated worlds are identical. In both, CO₂ and other greenhouse gas emissions follow an intermediate scenario for the 21st century, which is one of several used to inform the UN’s Intergovernmental Panel on Climate Change reports.

The world in which CFCs were phased out looks like what we would expect from warmer future climates. Global temperatures increase, with all their negative consequences, but – as we expect for the real world – the ozone layer recovers to its historic levels by the middle of the century. In the other world, the ozone layer drastically thins and by the end of the century ozone concentrations everywhere fall below levels seen in the Antarctic ozone hole. 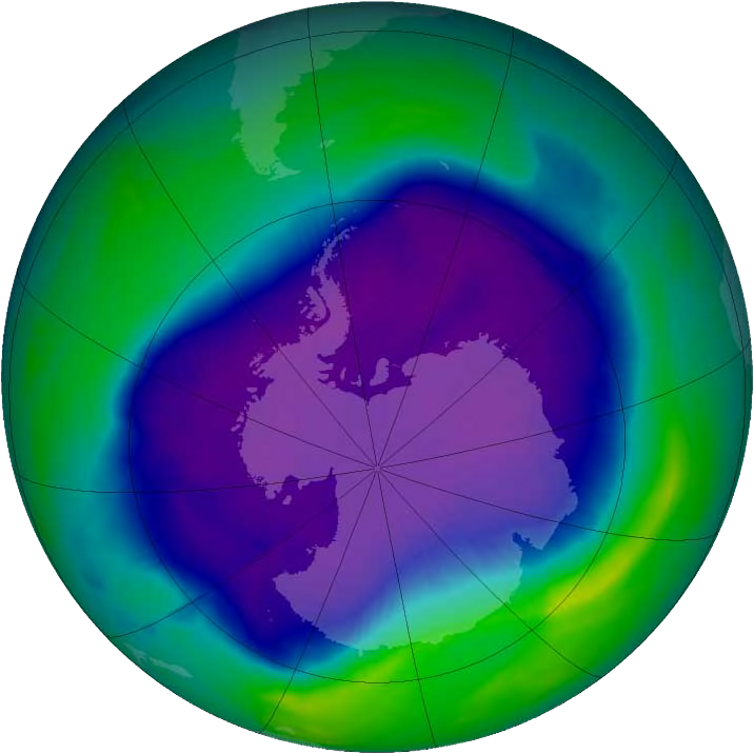 The Antarctic ozone hole recorded at its greatest extent in September 2006. NASA

By itself, this 0.8°C would be enough to take current global temperatures (just over 1°C above the pre-industrial average) to beyond the 1.5°C level that represents the most ambitious target of the Paris Agreement. Adding the 1.7°C that would have resulted from the greenhouse effect of CFCs themselves means that an extra 2.5°C of warming was prevented by the Montreal Protocol. 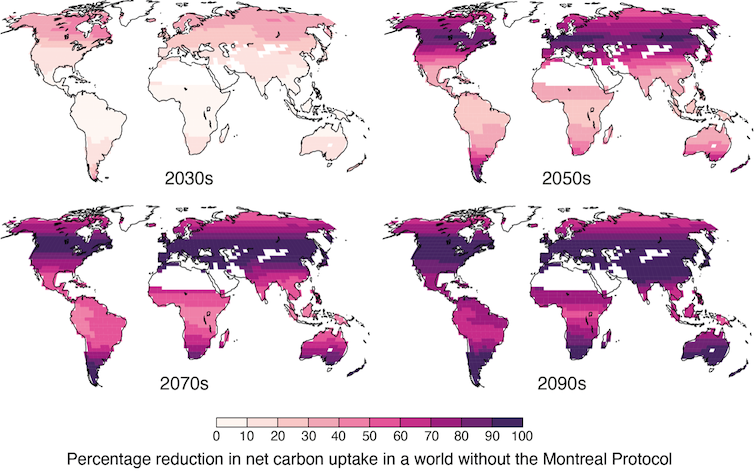 While we have avoided the world from our simulations, threats to the ozone layer still exist. Some scientists favour counteracting climate change by emulating the global cooling effects of large volcanic eruptions – injecting particles into the upper atmosphere in a process known as stratospheric sulphate geoengineering.

But this could deplete the ozone layer. Our study shows that the knock-on effect on the biosphere must be considered in any impact assessment of such actions.

For its effectiveness in acting on dire scientific warnings, it’s tempting to think of the Montreal Protocol as a model for climate negotiations. Yet with just a handful of companies making CFCs and alternative chemicals readily available, the ozone issue was far more straightforward than reducing emissions from fossil fuels.

Nevertheless, as well as protecting the ozone layer, the Montreal Protocol has itself been a phenomenally successful climate treaty. It has controlled not only the emissions of highly potent greenhouse gases like CFCs, but, as we have shown, it has avoided additional CO₂ levels through protecting the world’s plant life.