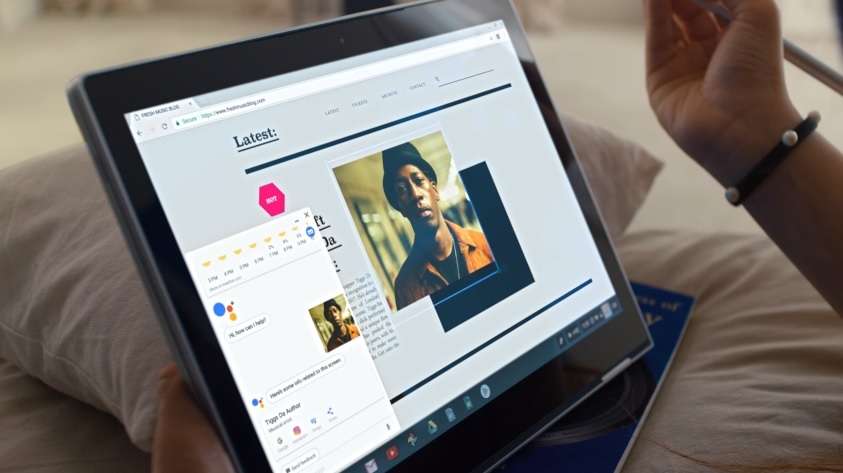 From the Pixelbook official trailer | Photo credit: Made by Google/YouTube screenshot

Tech fans, especially those who love Chrome OS-powered devices, could be looking out for the announcement of Pixelbook 2 this year. While the hybrid Chromebook is not confirmed yet, some of the upgrades it could sport may be easy to predict based on the features that Google introduced since Pixelbook’s launch.

When the first Pixelbook launched in 2017, laptop and tablet displays that support 4K resolution were not that widespread yet. So it was not out of place that Google launched it with just a 2,400 x 1,600 Quad HD display.

The following year, Google skipped on Pixelbook 2 but announced the Pixel Slate tablet where the company debuted the Molecular Display feature. It was built with the low-temperature polycrystalline silicon (LTPS) panel with a 3,000 x 2,000 resolution that meant more vibrant colors and a faster screen process.

Google further improved this tech by increasing the resolution specs to 3,840 x 2,160 to achieve 4K Ultra HD with beefed-up pixel density at 331 ppi as a top-tier variant of the Pixelbook Go released in 2019. These year-by-year developments show that, even though Google did not refresh the Pixelbook lineup annually, there was still a steady progress in certain technical aspects of its Chrome OS devices.

Google has not implied any cancellation of the next-generation Pixelbook and refused to label Pixelbook Go as the follow-up to the 2017 laptop/tablet. This leaves room for tech fans to expect that Pixelbook 2 could be announced in the near future. And when that happens, it would a huge miss for Google not to carry over the 4K Ultra HD Molecular Display feature to it.

Pixelbook 2 release date: Next Pixelbook could be the star of Google’s October event this year

Since Google made the transition to becoming one of the top competitors in the smartphone, smart home, and laptop markets it regularly held an October event called Made by Google.

It is during this same shindig in 2017, 2018, and 2019 that the company announced Pixelbook, Pixel Slate, and Pixelbook Go. In any case that Google is planning to finally unveil Pixelbook 2 this year, the company would most likely do it in October in this year’s Made by Google event.