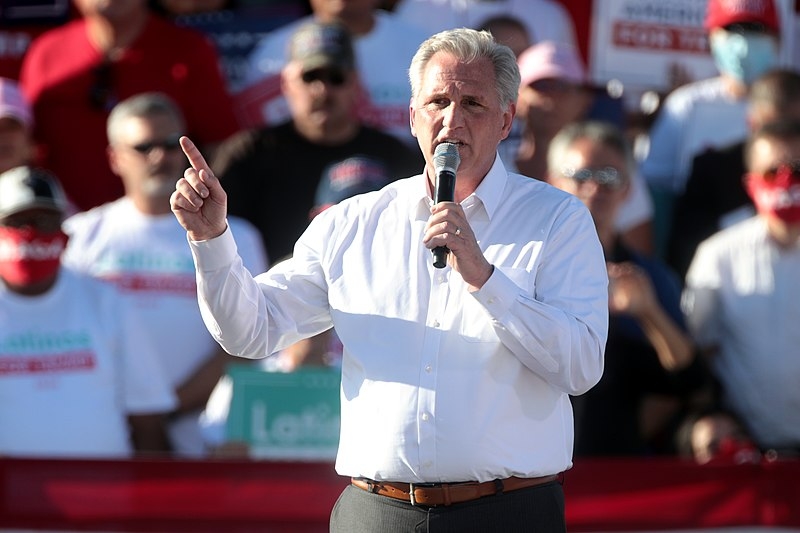 House Minority Leader Kevin McCarthy has been caught in a bind, especially as more details of the Jan. 6 insurrection at the Capitol are revealed. With McCarthy’s constant attempts to pin the blame of the insurrection on someone else, Democratic Rep. Eric Swalwell has questioned the Minority Leader’s accusations.

In the months since the insurrection, McCarthy has sought to redirect the blame of the insurrection on someone else, even after initially accusing disgraced former President Donald Trump shortly after the riots. However, in his accusations, Swalwell questioned why McCarthy did not call on those other people he has accused of involvement in the insurrection that left five people dead.

“Answer me this: if @GOPLeader McCarthy thinks anyone but Trump was responsible for January 6, why is Trump the ONLY person McCarthy contacted to call off the attack? McCarthy didn’t call @SpeakerPelosi or Antifa, etc. to stop it. He knew then and he knows now,” tweeted Swalwell.

With the House Select Committee already having launched its investigation into the riots, McCarthy and many other Republicans have sought to undermine the probe. Some House Republicans have also called for McCarthy to expel Reps. Liz Cheney and Adam Kinzinger from the caucus. Cheney and Kinzinger are the two Republican members of the panel that has been formed so far.

Several of the accusations were not only that Pelosi was responsible, but also the FBI had staged the insurrection, among other excuses, in an attempt to mislead who was responsible for inciting the attack on the Capitol.

Aside from being caught in a snag over his accusations, McCarthy is also facing calls to resign from his position as House Minority Leader following comments he made about wanting to hit House Speaker Nancy Pelosi with the gavel should he become Speaker in 2022. While McCarthy’s spokesman clarified saying that the House Minority Leader was “obviously joking,” the “joke” comes six months after the riots where Pelosi was also being targeted by the mob.

Several Democratic lawmakers called for McCarthy to resign, including Swalwell. “America has suffered enough violence around politics. @GOPLeader McCarthy is now a would-be assailant of @SpeakerPelosi,” tweeted the California Congressman.