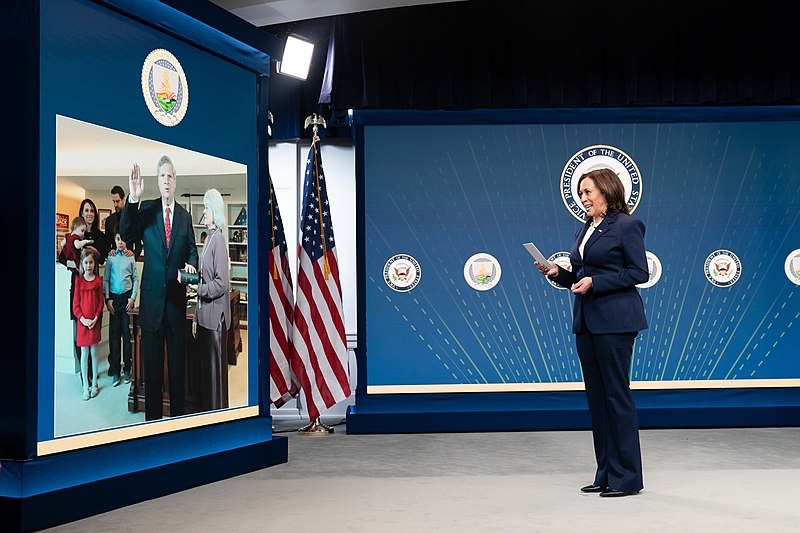 In prerecorded remarks as Harris is currently traveling around the country to promote the American Rescue Plan, the vice president touched on the role of women in a democracy during the 65th Session of the Commission of the Status of Women this week.

Harris said that the status of democracy also depends on the empowerment of women, noting the exclusion of women in making important decisions becoming an indicator of a flawed democracy. The vice president’s speech to the UN comes shortly after she appeared before the European Parliament last week for International Women’s Day.

“The status of democracy also depends fundamentally on the empowerment of women. Not only because the exclusion of women in decision-making is a marker of a flawed democracy, but because the participation of women strengthens democracy,” said Harris in her speech.

“When women face obstacles to obtaining quality health care, when women face food insecurity, when women are more likely to live in poverty, and therefore disproportionately impacted by climate change, more vulnerable to gender-based violence, and therefore disproportionately impacted by conflict. Well, it’s harder for women to fully participate in decision-making, which of course, in turn, makes it much harder for democracies to thrive.”

People knowledgeable in Harris’ preparation revealed to CNN that the vice president’s remarks were important in reaffirming the Biden administration’s commitment to the UN.

In other related news, the bombshell interview with the Duke and Duchess of Sussex by Oprah sparked a huge debate and Harris previously expressed her support for Meghan Markle when she opened up about her struggles with dealing with the negative press back in 2019.

Harris, who was a Democratic presidential candidate at the time, praised Ms. Markle’s decision to open up and added that showing emotion is a sign of strength than that of weakness. In 2020, Harris praised Ms. Markle again for speaking out against racism during the time of the Black Lives Matter protests.