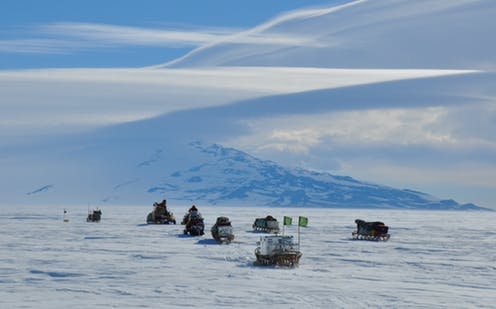 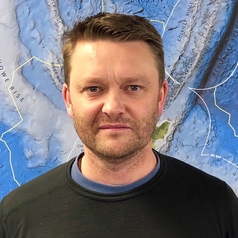 The ocean that surrounds Antarctica plays a crucial role in regulating the mass balance of the continent’s ice cover. We now know that the thinning of ice that affects nearly a quarter of the West Antarctic Ice Sheet is clearly linked to the ocean.

The connection between the Southern Ocean and Antarctica’s ice sheet lies in ice shelves – massive slabs of glacial ice, many hundreds of metres thick, that float on the ocean. Ice shelves grind against coastlines and islands and buttress the outflow of grounded ice. When the ocean erodes ice shelves from below, this buttressing action is reduced.

While some ice shelves are thinning rapidly, others remain stable, and the key to understanding these differences lies within the hidden oceans beneath ice shelves. Our recently published research explores the ocean processes that drive melting of the world’s largest ice shelf. It shows that a frequently overlooked process is driving rapid melting of a key part of the shelf.

Interestingly, not all ice shelves are melting quickly. The largest ice shelves, including the vast Ross and Filchner-Ronne ice shelves, appear close to equilibrium. They are largely isolated from CDW by the cold waters that surround them. 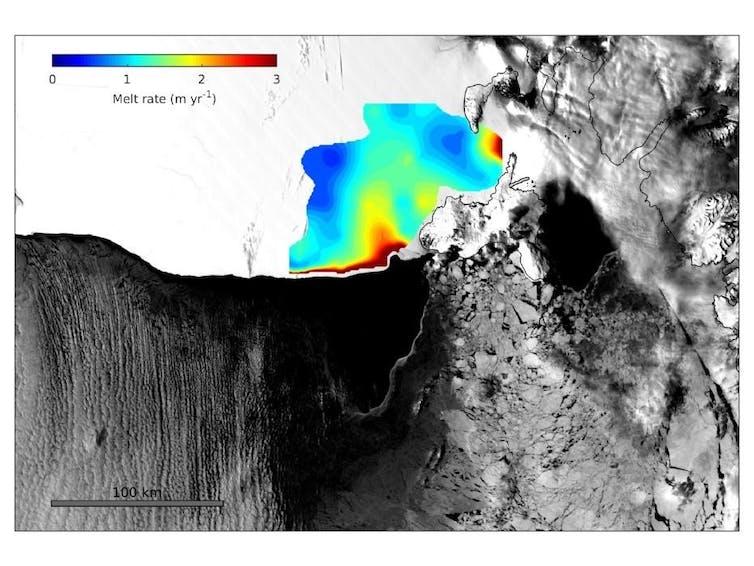 The contrasting effects of CDW and cold shelf waters, combined with their distribution, explain much of the variability in the melting we observe around Antarctica today. But despite ongoing efforts to probe the ice shelf cavities, these hidden seas remain among the least explored parts of Earth’s oceans.

It is within this context that our research explores a new and hard-won dataset of oceanographic observations and melt rates from the world’s largest ice shelf.

Beneath the Ross Ice Shelf

In 2011, we used a 260 metre deep borehole that had been melted through the north-western corner of the Ross Ice Shelf, seven kilometres from the open ocean, to deploy instruments that monitor ocean conditions and melt rates beneath the ice. The instruments remained in place for four years.

The observations showed that far from being a quiet back water, conditions beneath the ice shelf are constantly changing. Water temperature, salinity and currents follow a strong seasonal cycle, which suggests that warm surface water from north of the ice front is drawn southward into the cavity during summer.

Melt rates at the mooring site average 1.8 metres per year. While this rate is much lower than ice shelves impacted by warm CDW, it is ten times higher than the average rate for the Ross Ice Shelf. Strong seasonal variability in the melt rate suggests that this melting hotspot is linked to the summer inflow. 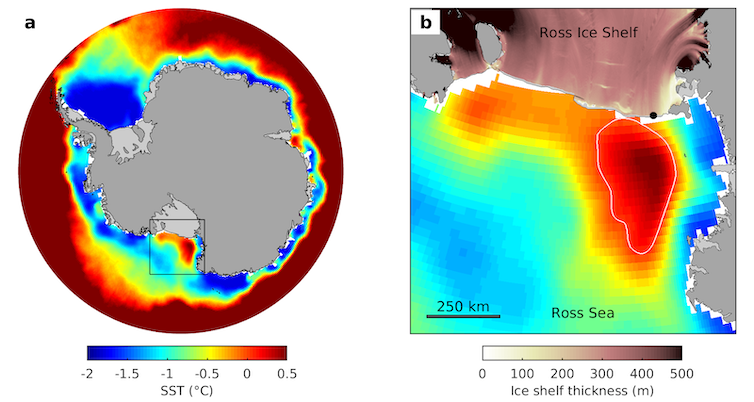 Summer sea surface temperature surrounding Antarctica (a) and in the Ross Sea (b) showing the strong seasonal warming within the Ross Sea polynya. Figure modified from https://www.nature.com/articles/s41561-019-0356-0. Supplied, CC BY-ND

To assess the scale of this effect, we used a high-precision radar to map basal melt rates across a region of about 8,000 square kilometres around the mooring site. Careful observations at around 80 sites allowed us to measure the vertical movement of the ice base and internal layers within the ice shelf over a one-year interval. We could then determine how much of the thinning was caused by basal melting.

Melting was fastest near the ice front where we observed short-term melt rates of up to 15 centimetres per day – several orders of magnitude higher than the ice shelf average rate. Melt rates reduced with distance from the ice front, but rapid melting extended far beyond the mooring site. Melting from the survey region accounted for some 20% of the total from the entire ice shelf.

Why is this region of the shelf melting so much more quickly than elsewhere? As is so often the case in the ocean, it appears that winds play a key role.

During winter and spring, strong katabatic winds sweep across the western Ross Ice Shelf and drive sea ice from the coast. This leads to the formation of an area that is free of sea ice, a polynya, where the ocean is exposed to the atmosphere. During winter, this area of open ocean cools rapidly and sea ice grows. But during spring and summer, the dark ocean surface absorbs heat from the sun and warms, forming a warm surface pool with enough heat to drive the observed melting.

Although the melt rates we observe are far lower than those seen on ice shelves influenced by CDW, the observations suggest that for the Ross Ice Shelf, surface heat is important.

Given this heat is closely linked to surface climate, it is likely that the predicted reductions in sea ice within the coming century will increase basal melt rates. While the rapid melting we observed is currently balanced by ice inflow, glacier models show that this is a structurally critical region where the ice shelf is pinned against Ross Island. Any increase in melt rates could reduce buttressing from Ross Island, increasing the discharge of land-based ice, and ultimately add to sea levels.

While there is still much to learn about these processes, and further surprises are certain, one thing is clear. The ocean plays a key role in the dynamics of Antarctica’s ice sheet and to understand the stability of the ice sheet we must look to the ocean.