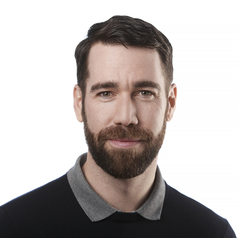 Canadians are soon heading to the polls to cast their ballots in the 2019 federal election after Prime Minister Justin Trudeau made efforts to deflect a political controversy that has dogged him this election year.

Known as the SNC-Lavalin Affair, it involved attempts to interfere in the judicial system and resulted in the resignation of two cabinet ministers and the prime minister’s principal secretary, Gerald Butts.

The high-profile scandal involving one of Trudeau’s most trusted confidantes put the spotlight back on the size and influence of Canada’s political advisers.

Since the 1970s and 1980s, Canada, the United Kingdom, Ireland, Australia and New Zealand have seen consistent growth and influence of political staff. But Canada has the largest cohort of political staff in any Anglo-Westminster country. For 2018-19, the federal government had a record 667 staff, according to the Office of Ethics Commissioner, which monitors conflicts of interest with appointed officials.

In the United Kingdom, from where Canada modelled its Westminster system of government, the number of equivalent special advisers was 100 (the U.K. has a cap on numbers and are mostly only senior roles). Australia, like Canada, has been enthusiastic with recruiting political staff, and employs about 447 at the federal level.

The graph below demonstrates Canada’s largesse: 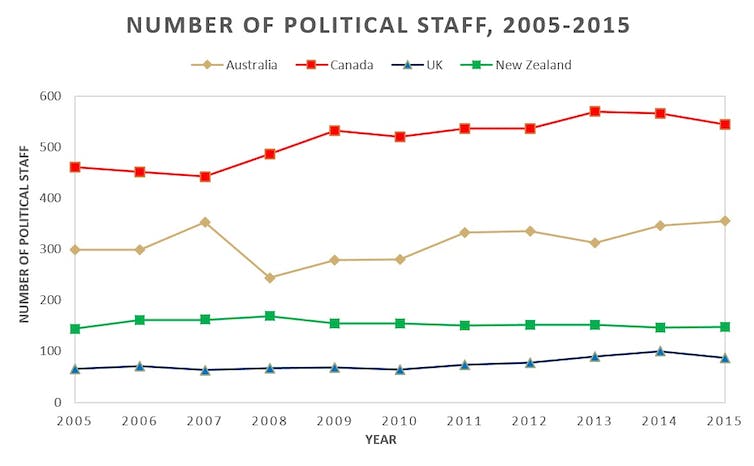 The most powerful advisers work for cabinet ministers.

These ministerial staff are appointed political positions in a cabinet minister’s office and in opposition offices. Strictly speaking, they are not civil servants — they’re sometimes called exempt staff —and do not need to be politically neutral.

They provide an additional voice to government and perform political tasks that apolitical civil servants cannot and should not perform. In addition to working for federal politicians, a further cohort of political advisers can be found at the sub-national level in Canadian provinces, Australian states and the U.K.’s devolved governments.

Canada was quick to experiment with the adviser system.

Growth began in the 1960s under Prime Minister Lester B. Pearson, but doubled under the following Pierre Trudeau administration. Australia began to experiment with ministerial staff in the mid-1970s.

Tom Axworthy, Pierre Trudeau’s former principal secretary and speechwriter, explained to me the aim for doubling the number of partisan advisers in 1968:

“The executive needed a political perspective on bureaucratic policy advice. Civil servants would have their viewpoint. Partisans could then offer a different, useful adjunct. Political advisers can also protect civil servants from carrying out what can be classified as political work. Today, however, the role has expanded more than I imagined.”

Staff in ministers’ offices have consistently increased and become more political in the last 50 years.

For example, in 1967, Pearson employed more than 40 people in his office, almost all of them recruited from the civil service. Twenty years later, in 1987, Prime Minister Brian Mulroney employed 117 staff in his office, with a mixture of political appointments and seconded civil servants.

In 2018, Trudeau employed around 152 staff in his office, almost exclusively recruited as partisan appointees. Obtaining accurate numbers of political staff is challenging, however, because Canadian government data is weak.

The graph below illustrates the growth in staff in the Prime Minister’s Office since 1960: 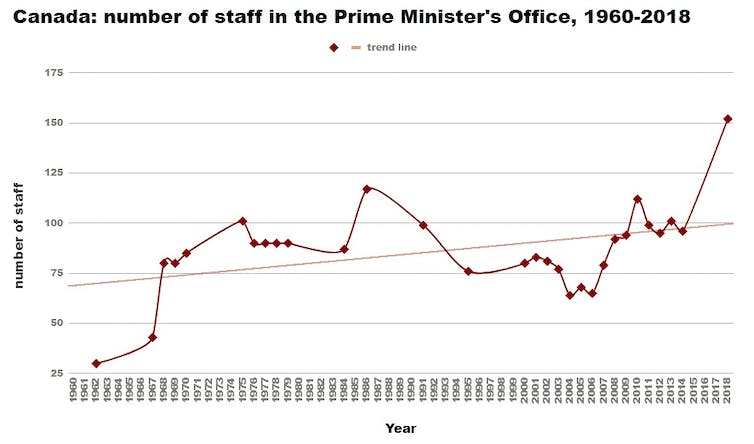 Canada: Number of staff in the Prime Minister’s Office.

New governments also affect the number and influence of ministerial staff. In 1993, Jean Chretien’s Liberal government reduced the number of staff, in part, to demonstrate frugality and also because the Liberals traditionally have greater trust in using civil servants.

In contrast, the size of the Prime Minister’s Office increased dramatically following election wins by Conservative governments headed by Mulroney in 1984 and Stephen Harper in 2006.

Mulroney also elevated the “executive assistant” position in the PMO to a “chief of staff” job. This expanded the adviser role in influence and salary equal to the most senior civil servant in a government department.

Regardless of whether Trudeau wins a second term or Andrew Scheer’s Conservatives form the next government, every incoming government should invest time to organize ministers’ offices.

Trudeau was slow to recruit staff to his office in the first 12 months of his new government. In March 2016, around five months after winning the election, his government had recruited just 381 ministerial staff. In contrast, the previous Harper Government had, on average, 553 ministerial staff during his last four years in office. The slack recruitment wasted precious time, slowing efforts to fulfil Trudeau’s agenda.

This is not a critique of Trudeau. Leaders often invest little effort into how their office should be structured or organized. They often recruit loyal party campaigners who invariably lack experience and capacity as government advisers.

So here are five tips for the new government come Oct. 22:

There is no question ministers need both administrative and political staff to support their important portfolios. However, Canada’s largesse in this area is disproportionate to other Westminster model countries. A national review of political staff could enhance the system.