‘The Winds of Winter’: George RR Martin gives update about his progress and may have hinted about the new release date 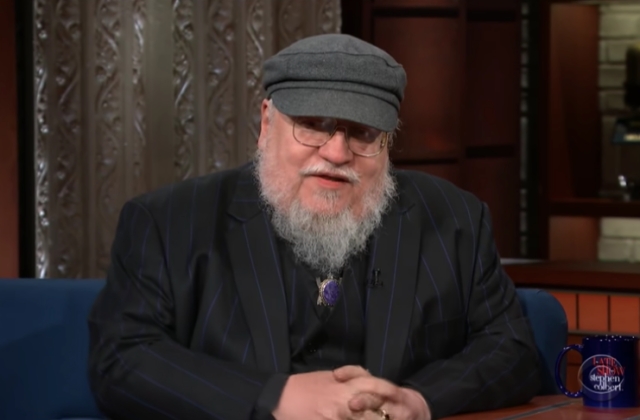 Photo by: The Late Show With Stephen Colbert/YouTube

The most awaited book today is not coming this month or this year, and this was confirmed by George RR Martin. Although he did not directly say it, his latest statements revealed that the sixth book in the “A Song of Ice and Fire” book series, which is “The Winds of Winter,” is not yet ready for publishing.

This may be a piece of sad news for fans who have been hoping that the 71-year-old will fulfill his promise of releasing the book at the end of this month or early August. But there is some silver lining from this as Martin shared some updates about his progress in writing “The Winds of Winter.”

“I’m spending long hours every day on ‘THE WINDS OF WINTER’ and making steady progress,” Martin wrote on his blog late last month. “I completed a new chapter yesterday, another one three days ago, another one the previous week.”

But even if he has finished many chapters, George RR Martin clarified that this does not mean that he can release the “TWOW” very soon. He said that it is a huge book and admitted that he still has a long way to go to complete it.

“Please do not give any credence to any of the click-bait websites that like to parse every word of my posts as if they were papal encyclicals to divine hidden meanings,” the author added.

While he clearly said that “The Winds of Winter” will still take some time to finish, he assured everyone that he is focused on it while in isolation during this time of the coronavirus pandemic. He is now writing at a steady pace, unlike before, when he was so busy with other projects and speaking engagements.

Express opined that Geroge RR Martin may have hinted that “The Winds of Winter” will be done and released in 2021. It was also suggested that this may be the final book which means the seventh one titled “A Dream of Spring” will never be released perhaps, it’s because the author is getting older already. This may also explain why Martin said that this is a “huge book” which may mean longer with more chapters than normal.