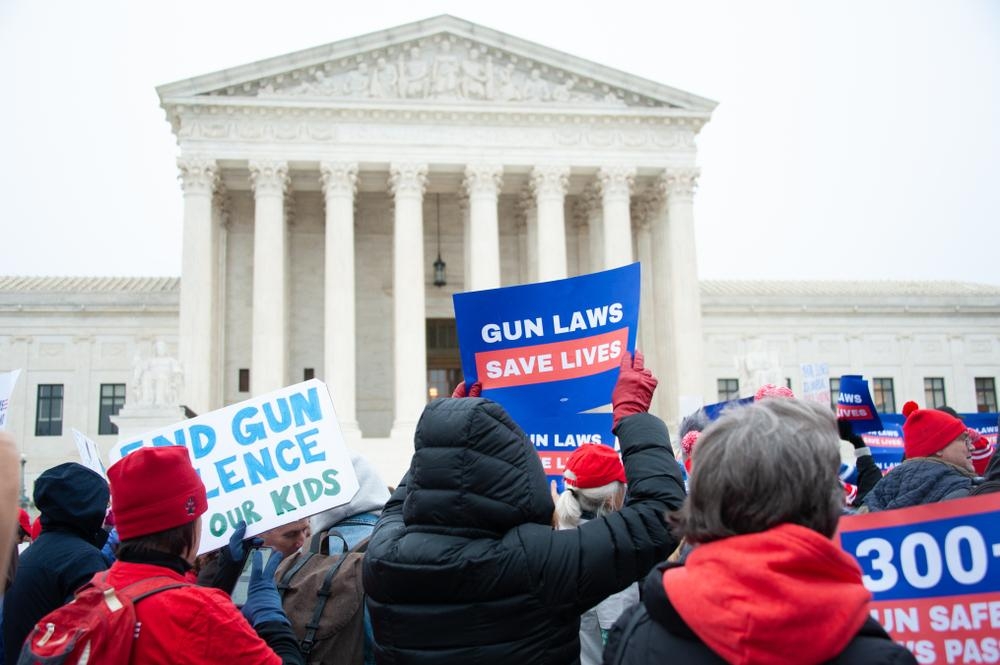 Supporters of gun controls rally outside the Supreme Court. Shutterstock 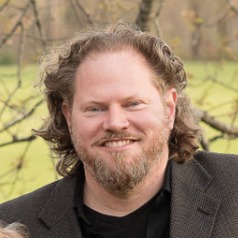 Faced with the question “does the constitutional right to possess a gun extend outside the home?” the majority of the Supreme Court appears to be heading toward the answer “yes.”

On Nov. 3, 2012, justices heard oral arguments over New York’s restrictions on the carrying of firearms in public. Supreme Court watchers reported that conservative justices – who make up the bulk of the court – appeared to be of the view that the state’s laws contravene individuals’ right to self-defense outside of their own property.

“Why isn’t it good enough to say I live in a violent area, and I want to be able to defend myself?” Justice Brett Kavanaugh wondered.

The nine-member panel is far from the first to ponder such questions. The crux of the issue before the Supreme Court is captured by a debate that Thomas Jefferson had with himself at the time of the founding.

When Jefferson was drafting a proposed constitution for his home state of Virginia in June 1776, he suggested a clause that read “No freeman shall ever be debarred the use of arms.”

In the second draft, he added in brackets, “[within his own lands or tenements].”

Jefferson’s debate with himself captures the question posed to the court: Is the purpose of the right to “keep and bear arms” the protection of a citizen’s “own lands,” or is it self-protection in general? Does the Second Amendment to the U.S. Constitution recognize a right to keep and bear arms in the home, or a right to “keep” firearms in the home and also “bear” them outside of the home for protection in society?

The plaintiffs in the case currently before the justices, New York Rifle & Pistol Association v. Bruen, want the court to strike down the state’s restrictions and allow citizens who meet basic requirements, such as having no criminal convictions, to carry concealed weapons.

Gun in the house

There are surprisingly few Supreme Court rulings on the meaning of the Second Amendment.

The question of whether the amendment recognizes a fundamental right – on par with free speech or free exercise of religion – was not decided until 2008 in the landmark ruling in District of Columbia v. Heller. For the first time, the court recognized a clear individual right to bear arms for the purpose of self-defense. This deeply disputed 5-4 ruling was expanded two years later to cover state laws.

The Heller ruling stated that the Second Amendment’s right is like the others in the Bill of Rights, which cannot be violated without the most compelling reasons. The amendment, the ruling says, “surely elevates above all other interests the right of law-abiding, responsible citizens to use arms in defense of hearth and home.” The Washington, D.C., law intended to reduce crime cannot ban firearms in “the home, where the need for defense of self, family, and property is most acute.”

That ruling – written by Justice Antonin Scalia, who died in 2016 and was replaced by Justice Neil Gorsuch – also recognized that “like most rights, the right secured by the Second Amendment is not unlimited.” Scalia cited regulations like “longstanding prohibitions on the possession of firearms by felons and the mentally ill” or “prohibitions on carrying concealed weapons” as “presumptively lawful.”

The principal dissent was written by Justice Stephen Breyer, the only dissenter in Heller still serving on the court. He emphasized the balance between core rights and the needs for public safety.

During oral arguments in the current case before the Supreme Court, Breyer expressed concern over loosening restrictions, suggesting there were legitimate concern over “gun-related chaos” resulting from having more guns in public places.

State governments follow very different procedures for determining who will be allowed to carry a concealed firearm outside of the home.

“Open carry,” or just having a handgun in plain sight on a belt holster or carrying a long gun (rifle or shotgun), is actually legal in many places. The general idea is that carrying openly would be done only by an honest actor, so less regulation is needed. “Concealed carry,” having a hidden weapon in a pocket or under a jacket, is far more restricted.

At one end of the continuum are near-bans on what are called “concealed carry licenses,” while at the other end are states in which no license is needed. These laws are referred to as “constitutional carry,” meaning the U.S. Constitution itself is a citizen’s license to carry a firearm.

In between these two positions are rules known as “shall issue,” whereby the government issues a license if the applicant meets the requirements such as having no felony convictions, or “may issue,” which gives the government discretion to deny a license based on perceptions of fitness.

New York state has “may issue” laws with stringent requirements, which in practice allow almost no licenses to be issued. Applicants must demonstrate a “proper cause” – such as being in imminent danger from a known source – which effectively eliminates ordinary applicants.

The strongest argument in the gun owners’ brief to the Supreme Court relates to New York’s insistence that citizens show an exceptional or extraordinary need to exercise a right that the court has recognized as fundamental.

As Chief Justice John Roberts asked during oral arguments on Nov. 3: “You don’t have to say, when you’re looking for a permit to speak on a street corner or whatever, that your speech is particularly important. So why do you have to show in this case, convince somebody, that you’re entitled to exercise your Second Amendment right?”

The strongest argument in the opposing brief from the New York State Police is federalism – the long-standing conservative argument that state lawmakers hold wide latitude to determine their own regulations to serve as “laboratories of experimentation,” as Justice Louis Brandeis phrased it in 1932. The federalist principle suggests that the court should defer to the judgment of state legislatures representing the needs of local citizens.

On Nov. 3, Justice Sonia Sotomayor, one of the most liberal justices on the court, immediately challenged the plaintiff’s advocate about the role of federalism: “Before recent times, there were so many different regulations. What it appears to me in the history and tradition of carrying weapons is that states get a lot of deference on this.”

As a close observer of the Supreme Court, I believe the justices’ reactions to the arguments suggest an outcome to the case in which the majority rules that a state can limit but not eliminate the core purposes of the protected right.

The Heller decision identifies at least one purpose as self-defense. The question is whether a specific concealed carry law creates a burden so strong that it becomes equivalent to eradication of the right to self-protection, or whether it imposes a legitimate public safety regulation that still maintains the core right for citizens who assert it.

The most permissive laws that allow unrestricted concealed carry are almost certainly not mandated by the Constitution.

“Shall issue” laws, which allow states to screen applicants for flaws but compel local governments to provide a concealed carry license to qualified citizens, are likely to be seen even by the conservative justices as legitimate regulations that do not create unconstitutional burdens.

However, the current court appears to be viewing a “may issue” law like New York’s, which allows the government to deny a license to nearly every applicant, as creating a burden that blocks the core of the right to self-protection where ordinary citizens are exposed to greater threats – outside the home.

Editor’s note: This article is an updated version of a story that was published on Nov. 1, 2021.