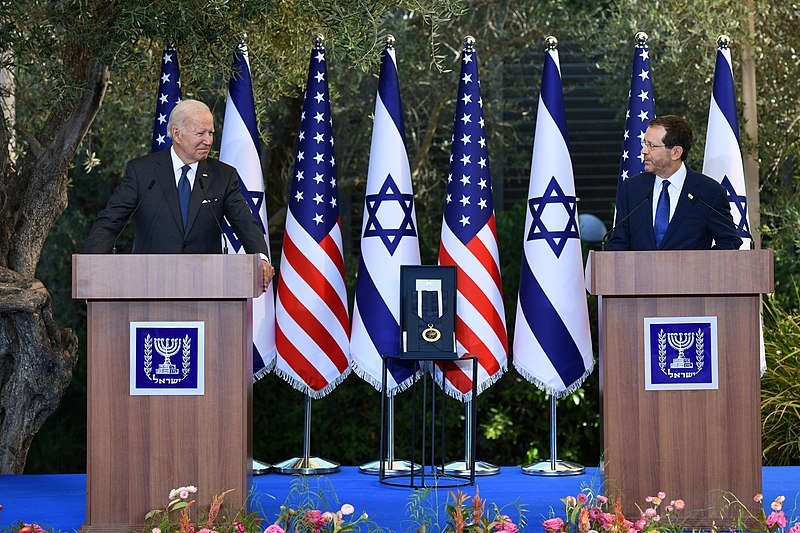 Spokesperson Unit of the President of Israel / Wikimedia Commons

Negotiations remain underway between Iran and the United States to restart the 2015 nuclear deal. US President Joe Biden said this week that he intends to keep Iran’s Revolutionary Guards on its Foreign Terrorist Organization list even if it leads to the scrapping of the nuclear agreement.

In televised remarks that aired on Israel’s Channel 12 Wednesday, Biden was pressed on whether he would keep the Islamic Revolutionary Guards of Iran in the US Foreign Terrorist Organization designation even if it meant that the nuclear deal would fall through. The US leader, who is currently visiting the Middle East, agreed.

Indirect talks between the US and Iran resumed last month in Qatar after negotiations were put on hold for months. The US, under Donald Trump, withdrew from the deal in 2018 and instead imposed sanctions on Iran as part of its “maximum pressure” campaign that the Biden administration appears to continue to enforce.

Progress was made earlier this year, with signs of restarting the deal. But the refusal of Washington to remove the IRGC from its terrorist organization list appears to remain a point of contention in the talks. The Trump administration designated the IRGC under the FTO list in 2019.

US officials said that the IRGC getting designated under its FTO list does not have any major implications on Iran’s military branch.

The Biden administration is also facing pressure from Democratic members of Congress to keep the IRGC on the FTO list. US Secretary of State Antony Blinken told lawmakers back in April that blacklisting the IRGC does not have any major impact.

Biden and Israeli Prime Minister Yair Lapid also reiterated their stances against Iran in a joint declaration where both countries committed to preventing Tehran from acquiring nuclear weapons. Both leaders signed the statement after holding a bilateral meeting in Jerusalem on the US leader’s second day of his Middle East engagement.

The statement said Washington would use “all elements of national power” available to keep Iran from arming itself with nuclear weapons. The US has also pledged to continue providing Israel with military assistance.

“The only way to stop a nuclear Iran is if Iran knows the free world will use force,” said Lapid during the news conference after the signing.