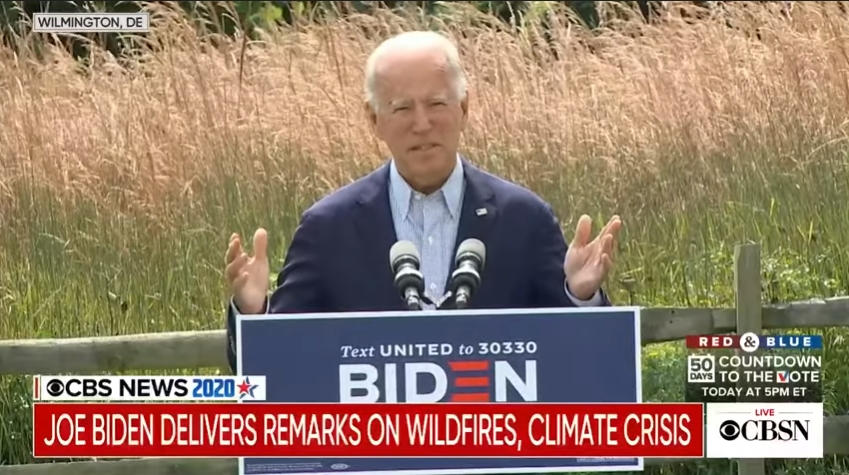 The West Coast in the United States is currently experiencing major wildfires, resulting from the warming global climate. Democratic presidential nominee Joe Biden spoke out against Donald Trump for his refusal to take the issue of climate change seriously.

Speaking in Wilmington, Delaware, Biden criticized Trump’s refusal to believe in the scientific evidence and reality about how climate change has resulted in the wildfires that have destroyed acres of land, left thousands of people homeless, and have killed 35 people in the process. Trump visited California to be briefed about the wildfires with the state environmental officials and California governor Gavin Newsom.

“Donald Trump’s climate denial may not have caused these fires and record floods and record hurricanes, but if he gets a second term, these hellish events will continue to become more common, more devastating, and more deadly,” said the former vice president.

Biden also described Trump’s climate denial and aversion to scientific facts and evidence “unconscionable.” Trump has previously referred to the issue as a “hoax” and has blamed the fires on poor forest management practices.

The Democratic presidential nominee previously outlined his plan to take on climate change. Biden proposed that in a span of four years, almost $2 trillion will be allocated into clean energy projects and eradicating carbon emissions produced by power plants by 2035. This plan is a part of many proposals to revive the US economy, which has suffered a collapse due to the COVID-19 pandemic.

Biden currently leads Trump in many public opinion polls, including those in battleground states, with other states seeing a head-to-head lead between the two candidates. Along with a poll lead, Biden has recently received another endorsement, this time from former Starbucks CEO Howard Schultz.

Schultz sent a message to his email list, informing them of his decision to back the Democratic nominee on Monday. Schultz previously considered entering the presidential race but eventually scrapped it out by September last year.

“While my exploration revealed that a run for office was not the best way for me to give back to a country that has given me so much, I continue to believe that our nation can live up to our ideals and that we all must envision and fight for a new American future,” wrote Schultz in the email. He and his wife Sheri Schultz will not only be endorsing Biden but will be donating to the Biden campaign.