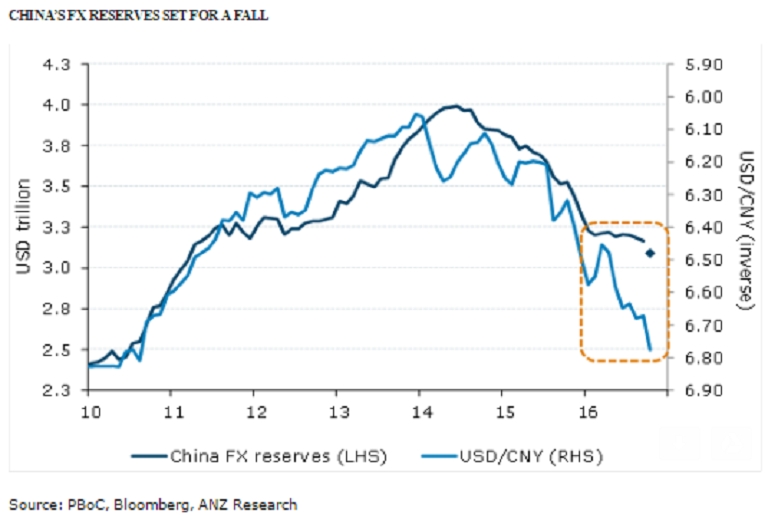 The foreign exchange reserves of China are expected to have sharply fallen during the month of October, following rising intervention from the People’s Bank of China (PBoC) amid strong appreciation of the greenback against its major trading partners and capital loss on fixed income investments.

China’s FX reserves data for October is due for release on 7 November. Despite the weakening in the yuan against the dollar since April, China’s FX reserves have remained fairly stable, with only modest declines recorded in August and September. A further resumption of dollar strength, coupled with the upcoming U.S. presidential election will add to the decline in FX reserves in the world’s second-largest economy.

The PBoC has increased their intervention activity in the past few months, as the market’s demand for dollars increased. It is estimated that during periods when the CNY is under weakening pressure, the PBoC’s FX activity as a share of the total spot trading volumes will rise to around 10 percent or more.

The USD was strong in October, appreciating against most other major currencies. This means that FX valuation effects will be negative in the month. Assuming their allocation is similar to the global aggregate based on the IMF’s COFER data, it is estimated that currency valuation effects will reduce their reserves by around USD30 billion, ANZ reported.

"For October, we see all key elements acting to reduce China’s headline FX reserves by the most since January, and certainly a lot more than the USD19.1bn decline that the market is anticipating," ANZ commented in its latest research report.