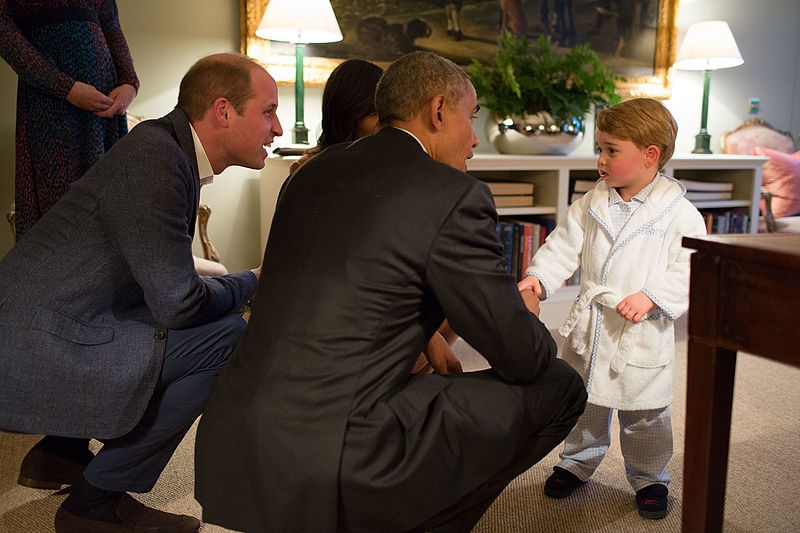 In 2016, President Barack Obama and First Lady Michelle Obama paid a visit to the Duke and Duchess of Cambridge. A report at that time reveals how the former president playfully recalled how Prince George “broke protocol” upon meeting him.

Express reports that the 2016 meeting between Obama and Prince George resurfaced in light of the news of Prince Charles, the Duke of Cornwall, has contracted COVID19. The Obamas met with the Duke and Duchess of Cambridge and also got to meet Prince George, who was two years old at the time. The then-president recalled the meeting during his last White House Correspondents’ Dinner, saying how adorable the young royal was, and jokingly said how Prince George supposedly broke protocol as he met the then-president in his pajamas and bathrobe.

“Last week, Prince George showed up to our meeting in his bathrobe. That was a slap in the face - a clear breach of protocol,” Obama jokingly recalled.

Obama playfully likened the meeting as a way of people preparing for him to leave the White House and how being greeted by Prince George in his bedtime attire to his political opponents no longer responding to his calls. “It’s not just Congress, even some foreign leaders, they have been looking ahead, anticipating my departure,” said the former president at the time.

Aside from the Duke and Duchess of Cambridge, the Obamas also met with the Queen, the Duke of Edinburgh, and Prime Minister David Cameron.

Recently, the former president paid tribute on social media to civil rights leader Joseph Lowery, who passed away at the age of 98 last week, Friday. Sharing a photo of him with Lowery in the White House, Obama tweeted, “Rev. Joseph Lowery was a giant who let so many of us stand on his shoulders. With boundless generosity, patience, and moral courage, he encouraged a new generation of activists and leaders. Michelle and I remember him fondly today, and our love and prayers are with his family.”

Obama went on to recall some memories with Lowery, and expressed his gratitude to the civil rights leader, who fought against racial discrimination alongside figures such as Dr. Martin Luther King, Jr. during the 1960s.