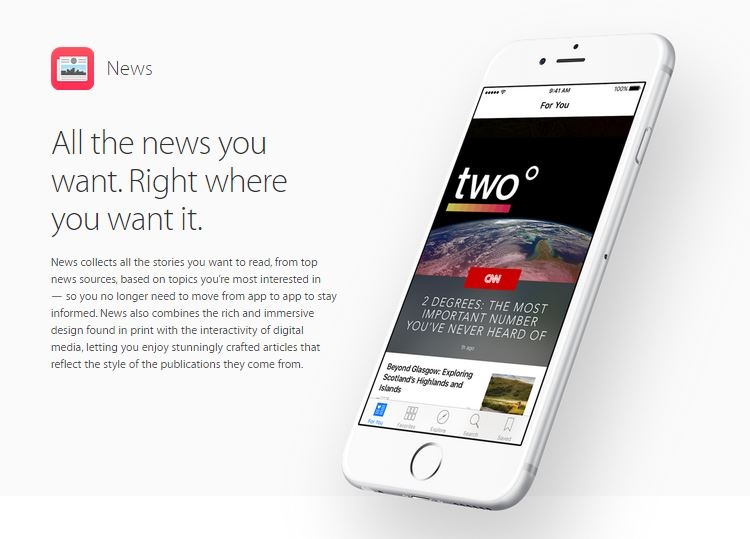 The iOS 9 software update, to be released today, has deeply unnerved the online advertising industry. It will allow users to download Web browser extensions that can block advertisements from being shown while web surfing.

Meredith Kopit Levien, the chief revenue officer at the New York Times, said on the company’s Aug. 6 earnings call that ad blocking is “a real issue for the ecosystem, and we, like everybody else, are trying to understand what impact it will have on our supply.” She said the effects haven’t been “material” but that the addition of mobile devices could make it “a bigger issue.”

The Silicon Valley giant hasn’t revealed the reason behind its decision, but Tim Cook has criticized Internet companies in the past for violating people’s privacy to boost ad revenue, Bloomberg reports.

“They’re gobbling up everything they can learn about you and trying to monetize it,” the Apple chief executive officer said in June during a speech at the Electronic Privacy Information Center. “We think that’s wrong.”

Ad-blocking software has been already in use for computer browsers for years. According to a study released in August by Adobe and PageFair, which makes ad-blocking software, over 198 million people worldwide actively use ad blockers.

AdBlock, one of the leading ad-blocking technology developers, says it is working on software to release alongside iOS 9. “This is a very big deal for us,” says Gabriel Cubbage, the president of AdBlock.

“News collects all the stories you want to read, from top news sources, based on topics you’re most interested in — so you no longer need to move from app to app to stay informed” -Apple

The news app will be hosted on Apple's servers, meaning that users would not be redirected to publisher's website or mobile app. This in turn will make sure that Apple remains the content's custodian for advertising and the valuable user data generated by a news consumer's interests and likings.

Regarding advertising revenue on Apple News, the company says:

“Monetization is made simple with iAd, Apple’s advertising platform. Earn 100% of the revenue from ads you sell, and 70% when iAd sells ads for you”

Although Apple has been very particular about how advertising will look on the news app, it has ceded on some points, such as, allowing publishers to include links to their websites.

"For Apple, it has to look and feel premium and glossy," said Marc Simons, co-founder of Giant Spoon, a marketing agency with offices in Los Angeles and New York. "They roll things out the way they want to roll it out."