What's on the far side of the Moon? 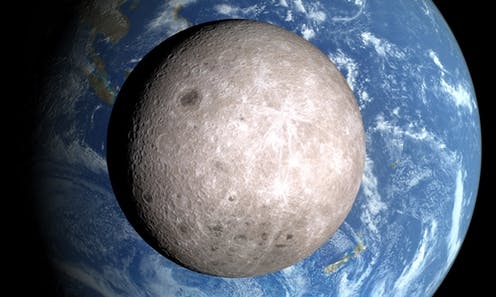 The far side looks a lot like the near side. NASA's Scientific Visualization Studio, CC BY 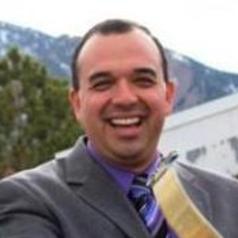 Looking up at the silvery orb of the Moon, you might recognize familiar shadows and shapes on its face from one night to the next. You see the same view of the Moon our early ancestors did as it lighted their way after sundown.

Only one side of the spherical Moon is ever visible from Earth – it wasn’t until 1959 when the Soviet Spacecraft Luna 3 orbited the Moon and sent pictures home that human beings were able to see the “far side” of the Moon for the first time. 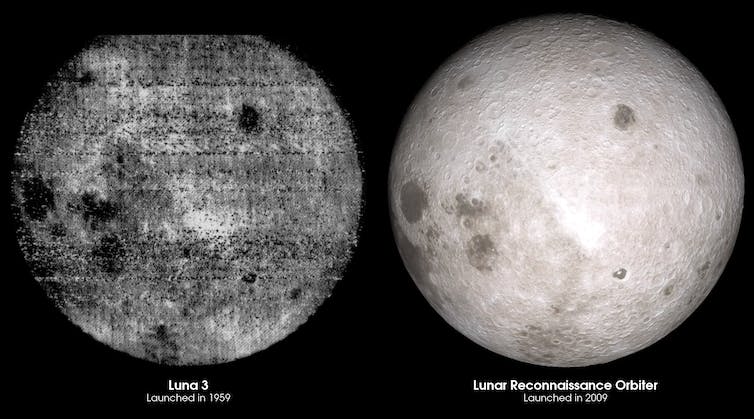 Comparison of humanity’s first glimpse of the lunar far side and the same view thanks to LRO data 50 years later. NASA's Goddard Space Flight Center Scientific Visualization Studio, CC BY

A phenomenon called tidal locking is responsible for the consistent view. The Earth and its Moon are in close proximity and thus exert significant gravitational forces on each other. These tidal forces slow the rotations of both bodies. They locked the Moon’s rotation in sync with its orbital period relatively soon after it formed – as a product of a collision between a Mars-sized object and the proto-Earth, 100 million years after the solar system coalesced.

The Moon’s orbital period and rotational period are the same length of time.

Now the Moon takes one trip around the Earth in the same amount of time it takes to make one rotation around its own axis: about 28 days. From Earth, we always see the same face of the Moon; from the Moon, the Earth stands still in the sky. 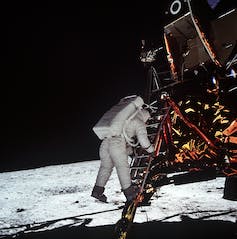 Buzz Aldrin descends from the lunar module to the surface of the Moon on July 20, 1969. JSC/NASA, CC BY

Although the far side of the Moon isn’t visible from our vantage point, and with all due respect to Pink Floyd, it is not accurate to call it the dark side of the Moon. All sides of the moon experience night and day just like we do here on Earth. All sides have equal amounts of day and night over the course of a single month. A lunar day lasts about two Earth weeks.

With modern satellites, astronomers have completely mapped the lunar surface. A Chinese mission, Chang'e 4, is currently exploring the Aitken Basin on the far side of the Moon — the first such mission ever landed there. Researchers hope Chang'e 4 will help answer questions about the crater’s surface features and test whether things can grow in lunar soil. A privately funded Israeli mission, Beresheet, started as a mission to compete for the Google Lunar X Prize. Despite crashing during an attempted landing earlier this month, the Beresheet team still won the Moon Shot Award.

Being shielded from civilization means the far side of the moon is “radio dark.” There, researchers can measure weak signals from the universe that would otherwise be drowned out. Chang'e 4, for instance, will be able to observe low-frequency radio light coming from the Sun or beyond that’s impossible to detect here on the Earth due to human activity, such as TV and radio broadcasts and other forms of communication signals. Low-frequency radio peers back in time to the very first stars and the very first black holes, giving astronomers a greater understanding of how the structures of the universe began forming. 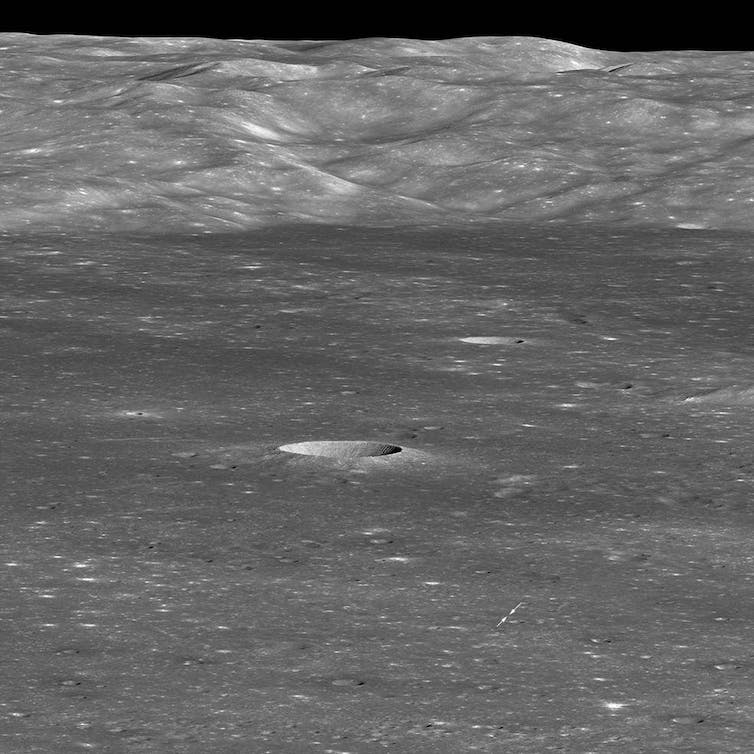 Arrows indicate position of Chang'e 4 lander on the floor of the Moon’s Von Kármán crater. The sharp crater behind and to the left of the landing site is 12,800 feet across and 1,970 feet deep. NASA/GSFC/Arizona State University, CC BY

Rover missions also investigate all sides of the Moon as space scientists prepare for future human missions, looking to the Moon’s resources to help humanity get to Mars. For instance, water – discovered by NASA’s LCROSS satellite beneath the Moon’s north and south poles in 2009 – can be broken up into hydrogen and oxygen and used for fuel and breathing.

Researchers are getting closer to exploring the Moon’s polar craters, some of which have never seen the light of day – literally. They are deep and in just the right place to never have the Sun shine onto the crater floor. There are certainly dark parts of the Moon, but the whole far side isn’t one of them.