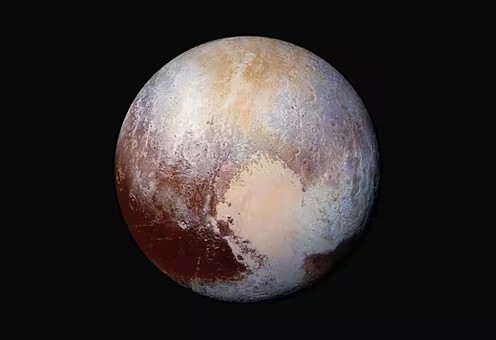 Pluto, the largest of the dwarf planets. This image was taken by NASA's New Horizons spacecraft. NASA/JHUAPL/SwRI 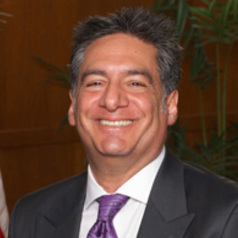 The word “planet” came from the ancient Greek words that mean “wandering star.” That makes sense, because for thousands of years, people have watched planets change position in the night sky – unlike stars, which appear fixed and unmoving to the naked eye.

That’s how the ancients discovered five of the planets: Mercury, Venus, Mars, Jupiter and Saturn. Astronomers using telescopes found Uranus in 1781, Neptune in 1846, and Pluto in 1930. 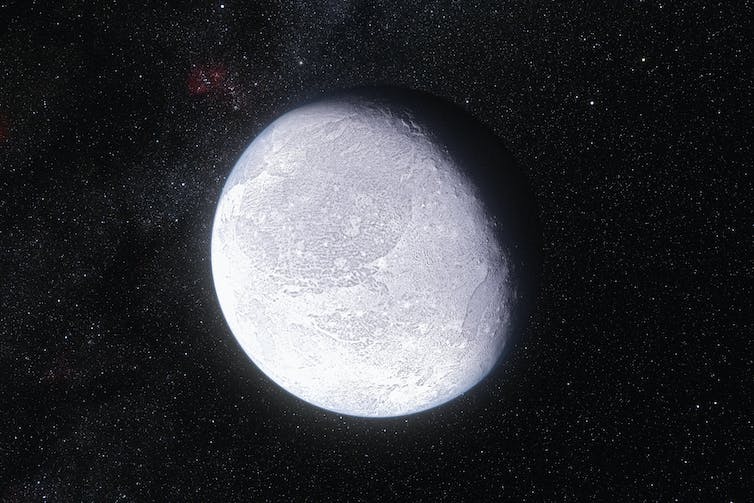 I’m a space scientist with a passion for astronomy and the exploration of the Solar System. I received my Ph.D. in physics in 1994, about the time astronomers began to find more and more objects beyond Neptune, in the Kuiper belt. That’s a place in space that holds the “leftovers” of the solar system – particularly small icy bodies.

Three of those icy bodies – Eris, Haumea and Makemake – were discovered in the early to mid 2000s. They seemed large enough to be planets; all of them are roughly the same size as Pluto.

Astronomers then surmised that there were likely many more of these icy bodies in the Kuiper belt. They began to wonder: How many planets might we end up identifying in our solar system? Twenty? Thirty? A hundred? More? 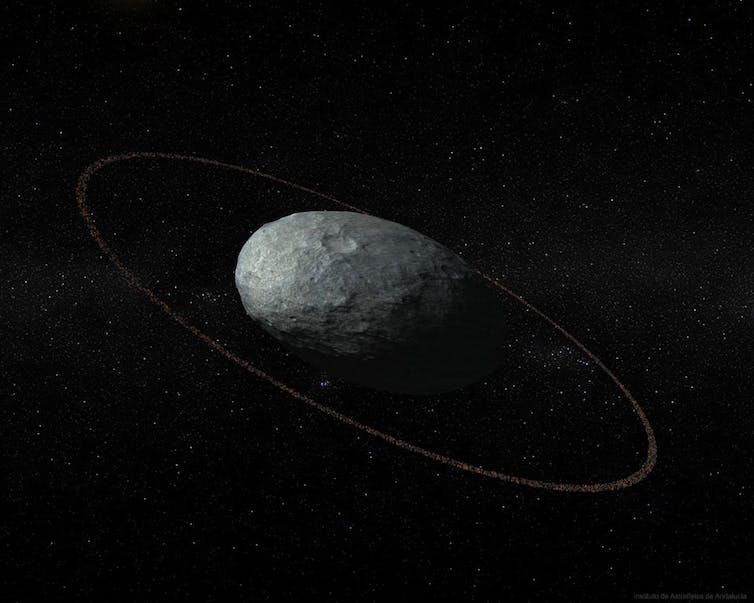 In 2006, and after much debate, the International Astronomical Union came up with a new definition for a planet. And for the first time, the term “dwarf planet” was used.

Here’s what the IAU said: A planet has to orbit the Sun directly. It also must be large enough to have a round, or spherical, physical shape.

And the planet must “clear its neighborhood.” That means, aside from any moons it might have, the planet can’t share its orbit with other objects of comparable size.

An object that satisfies only the first two criteria – but not the last – is now called a dwarf planet. 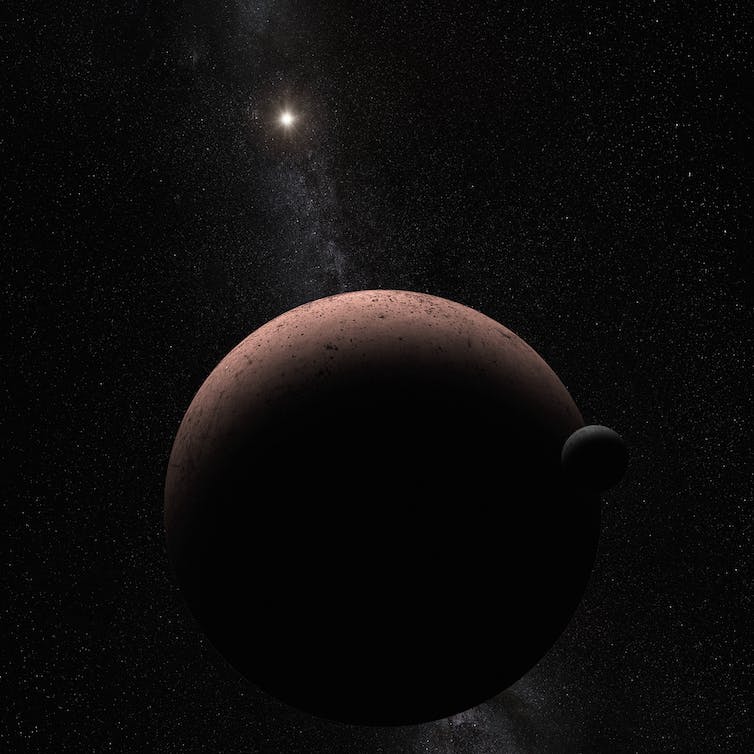 Artist’s illustration of Makemake, a dwarf planet in the Kuiper belt. Nearby is its moon, MK 2. Off in the distance: the Sun. NASA/ESA/A. Parker/Southwest Research Institute

That’s why Pluto lost its status as a planet and is now classified as a dwarf planet. It failed the final item on the checklist – other icy Kuiper belt bodies are within its orbital path. The decision, a controversial one to be sure, is debated by scientists to this very day.

At the same time Pluto got demoted, another solar system object was promoted. Ceres, once considered an asteroid, is now classified as a dwarf planet. It’s nowhere near the Kuiper belt; instead, Ceres is in the main asteroid belt, orbiting between Mars and Jupiter.

Add them up – Pluto, Ceres, Eris, Haumea and Makemake – and that brings the number of dwarf planets in our solar system to five. But that list is sure to grow. Already, hundreds of candidates, nearly all in the Kuiper belt, potentially satisfy the criteria to be a dwarf planet. 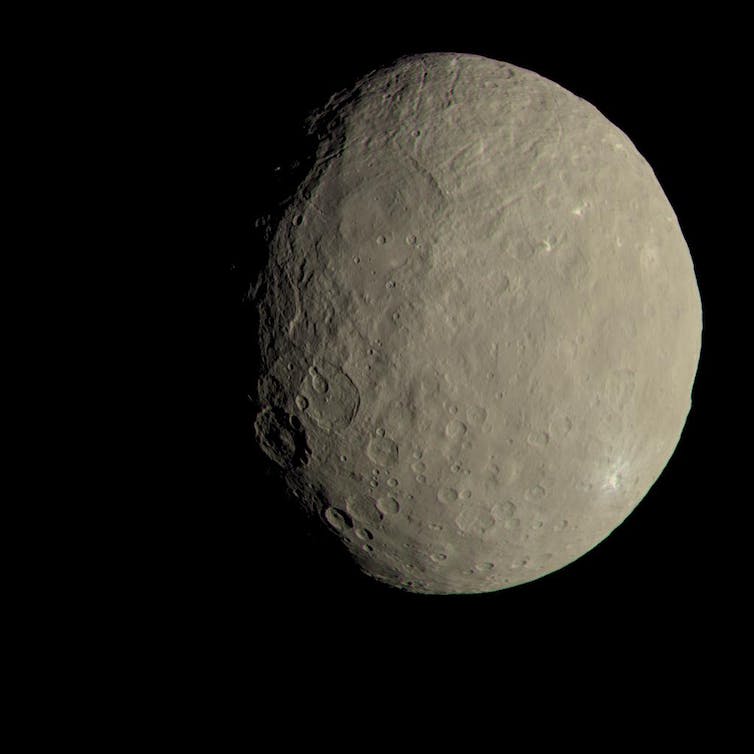 This photograph of Ceres, a dwarf planet in the main asteroid belt, was taken by NASA’s Dawn spacecraft. NASA/JPL-Caltech/UCLA/MPS/DLR/IDA

About the dwarf planets

As their name implies, they are much smaller. Pluto and Eris, the largest of the dwarfs, have less than one-fifth the diameter of the Earth.

They have less mass, too. For example, Earth has about 6,400 times more mass than Ceres. That’s like comparing two killer whales to a guinea pig.

And dwarf planets are cold. Pluto’s average temperature is around minus 400 degrees Fahrenheit (minus 240 Celsius). 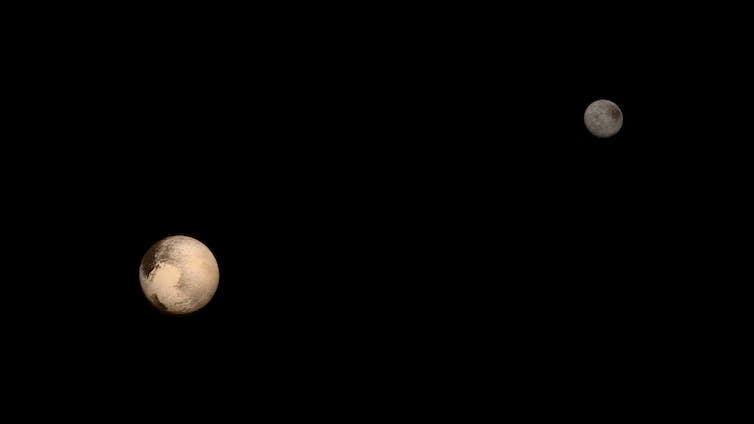 A photograph of Pluto and one of its five moons, Charon. Except for Ceres, all the dwarf planets have at least one moon. Charon is nearly half Pluto’s size. NASA/Johns Hopkins University Applied Physics Laboratory/Southwest Research Institute

Could life exist on a dwarf planet?

Three things are needed for life: liquid water, an energy source and organic molecules – that is, molecules containing carbon.

More than 100 miles (161 kilometers) below Pluto’s surface, an enormous ocean of liquid water may exist; this might also be true for other Kuiper belt worlds. Ceres also has subsurface water, remnants of what might have been an ancient global ocean.

Organic molecules, in abundance everywhere in our solar system, have been found on Ceres and Pluto.

But the one missing ingredient for all the dwarf planets is a source of energy.

Sunlight won’t work, particularly for the Kuiper belt dwarfs; they are simply too far away from the Sun. To reach the belt, the light must travel more than 2.7 billion miles (4.4 billion km). By the time the sunshine arrives at these distant worlds, it’s too weak to significantly heat any of them.

And all the dwarf planets are too small to hold the inner heat that remains from the solar system’s formation.

Yet scientists have discovered life on Earth in the most hostile places imaginable – near the bottom of the ocean, miles deep in the soil and even inside an active volcano. When it comes to life in our solar system, never say never.

Take a tour of the dwarf planet Ceres.