Warp factor: we've observed a spinning star that drags the very fabric of space and time 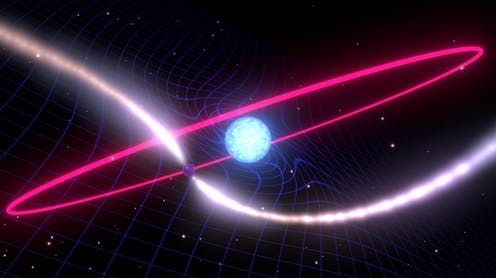 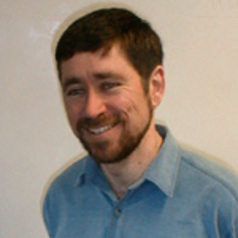 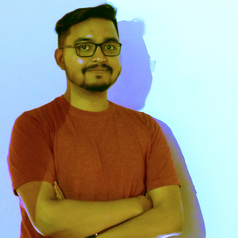 One of the predictions of Einstein’s general theory of relativity is that any spinning body drags the very fabric of space-time in its vicinity around with it. This is known as “frame-dragging”.

In everyday life, frame-dragging is both undetectable and inconsequential, as the effect is so ridiculously tiny. Detecting the frame-dragging caused by the entire Earth’s spin requires satellites such as the US$750 million Gravity Probe B, and the detection of angular changes in gyroscopes equivalent to just one degree every 100,000 years or so.

Luckily for us, the Universe contains many naturally occurring gravitational laboratories where physicists can observe Einstein’s predictions at work in exquisite detail. Our team’s research, published today in Science, reveals evidence of frame-dragging on a much more noticeable scale, using a radio telescope and a unique pair of compact stars whizzing around each other at dizzying speeds.

The motion of these stars would have perplexed astronomers in Newton’s time, as they clearly move in a warped space-time, and require Einstein’s general theory of relativity to explain their trajectories. 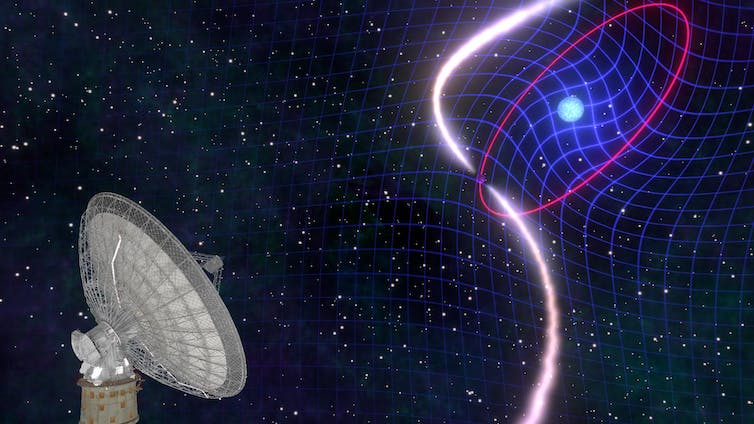 General relativity is the foundation of modern gravitational theory. It explains the precise motion of the stars, planets and satellites, and even the flow of time. One of its lesser-known predictions is that spinning bodies drag space-time around with them. The faster an object spins and the more massive it is, the more powerful the drag.

One type of object for which this is very relevant is called a white dwarf. These are the leftover cores from dead stars that were once several times the mass of our Sun, but have since exhausted their hydrogen fuel. What remains is similar in size to Earth but hundreds of thousands of times more massive. White dwarfs can also spin very quickly, rotating every minute or two, rather than every 24 hours like Earth does.

The frame-dragging caused by such a white dwarf would be roughly 100 million times as powerful as Earth’s.

That is all well and good, but we can’t fly to a white dwarf and launch satellites around it. Fortunately, however, nature is kind to astronomers and has its own way of letting us observe them, via orbiting stars called pulsars.

Compared with white dwarfs, pulsars are in another league altogether. They are made not of conventional atoms, but of neutrons packed tightly together, making them incredibly dense. What’s more, the pulsar in our study spins 150 times every minute.

This mean that, 150 times every minute, a “lighthouse beam” of radio waves emitted by this pulsar sweeps past our vantage point here on Earth. We can use this to map the path of the pulsar as it orbits the white dwarf, by timing when its pulse arrives at our telescope and knowing the speed of light. This method revealed that the two stars orbit one another in less than 5 hours.

This pair, officially called PSR J1141-6545, is an ideal gravitational laboratory. Since 2001 we have trekked to Parkes several times a year to map this system’s orbit, which exhibits a multitude of Einsteinian gravitational effects.

Mapping the evolution of orbits is not for the impatient, but our measurements are ridiculously precise. Although PSR J1141-6545 is several hundred quadrillion kilometres away (a quadrillion is a million billion), we know the pulsar rotates 2.5387230404 times per second, and that its orbit is tumbling in space. This means the plane of its orbit is not fixed, but instead is slowly rotating.

How did this system form?

When pairs of stars are born, the most massive one dies first, often creating a white dwarf. Before the second star dies it transfers matter to its white dwarf companion. A disk forms as this material falls towards the white dwarf, and over the course of tens of thousands of years it revs up the white dwarf, until it rotates every few minutes. 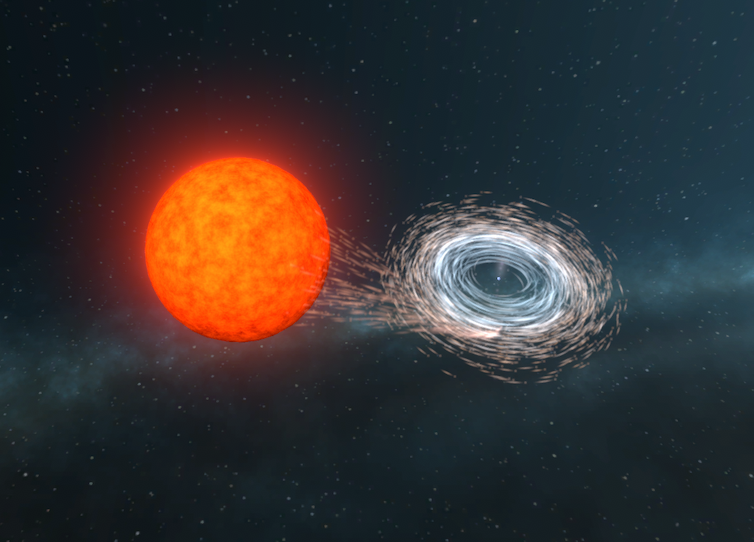 Artist’s impression of a white dwarf being spun-up by the transfer of matter from its companion. Material at the surface of the swollen star falls towards the white dwarf and forms a disk of material travelling so quickly it causes the star to spin rapidly. ARC Centre of Excellence for Gravitational Wave Discovery

In rare cases such as this one, the second star can then detonate in a supernova, leaving behind a pulsar. The rapidly spinning white dwarf drags space-time around with it, making the pulsar’s orbital plane tilt as it is dragged along. This tilting is what we observed through our patient mapping of the pulsar’s orbit.

Einstein himself thought many of his predictions about space and time would never be observable. But the past few years have seen a revolution in extreme astrophysics, including the discovery of gravitational waves and the imaging of a black hole shadow with a worldwide network of telescopes. These discoveries were made by billion-dollar facilities.

Fortunately there is still a role in exploring general relativity for 50-year-old radio telescopes like the one at Parkes, and for patient campaigns by generations of graduate students.