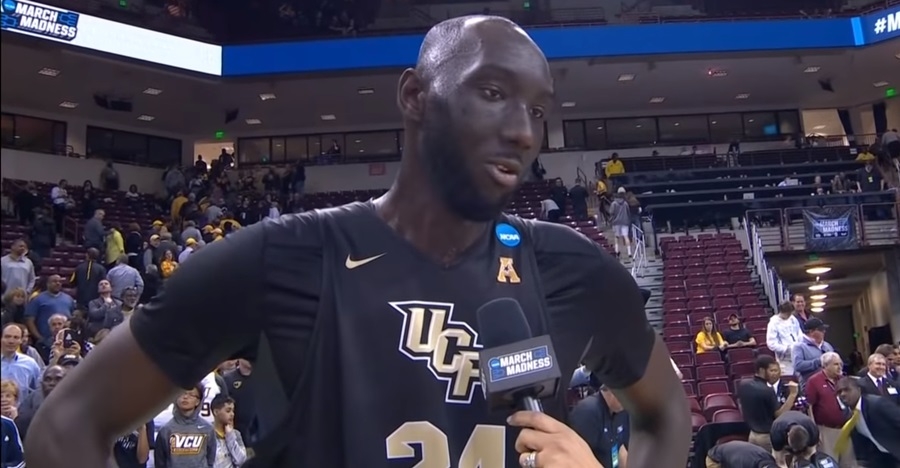 Tacko Fall has become an overnight sensation in the NBA after his appearance in this year’s Summer League. Standing at a magnificent 7’6 with a wingspan of 8-foot-4, Fall used freakish size to showcase plays rarely seen on the hardwood floor.

A giant among giants, guards, would simply lob Tacko Fall the ball and he’d tip-toe his way into the basket for an easy dunk or layup, barely leaving his foot from the ground as he did. This presented a lot of problems for the opposing team, with the crowd loving every second of it.

Indeed, the line of people that formed to acquire Tacko Fall’s autograph is a testament to this, with the throng chanting “Tacko” repeatedly as the big man made his way out the tunnel. But being popular is one thing, joining the Boston Celtics roster is another.

Tacko Fall’s future remains up in the air

Celtics general manager Danny Ainge said that they’re keeping an eye out for Tacko Fall as they recognize his raw potential. “We want to take his development very, very seriously. He's a high priority for us to try and really develop as a player,” Ainge said.

However, Tacko Fall’s spot in the Celtics remains an uncertainty, especially since the team has filled the previous open slot with Javonte Green by giving him a partially guaranteed contract. Meanwhile, Fall inked an Exhibit 10 contract with the Celtics. This guarantees him a spot on the team’s camp and $50,000 if the Cs is interested in him playing for the Main Red Claws.

With Al Horford leaving for the Sixers and Aron Baynes being traded to the Suns, Tacko Fall is in a position to shore up the fifth position for the Celtics and ensure the defense is solid. Sure, Daniel Theis, Enes Kanter, and Robert Williams already occupy that spot.

The problem with Tacko Fall

But those three aren’t on Horford’s level, which goes doubly true for Williams who’s still showing he’s a bit green on the side. The problem for Tacko Fall is that it’s still uncertain how he’ll fit with the current landscape of the NBA where small-ball is the main priority, and the pace is lightning fast. There’s also the looming apprehension of injury.

A player of his size usually falls prey to health complications that usually manifests itself later on. This is why the Celtics are still unsure about Tacko Fall, although the team isn’t disregarding him completely since there’s no denying the potential that he possesses.