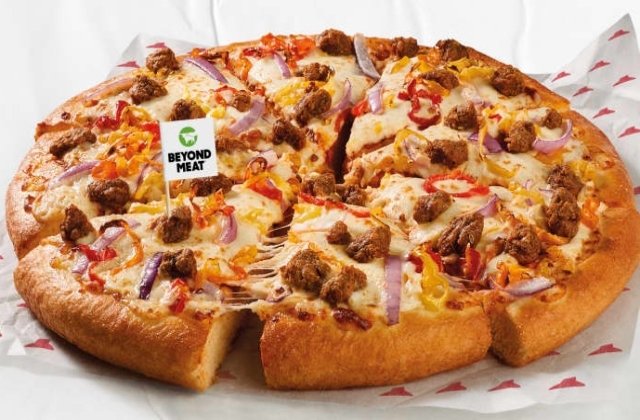 CNBC reported that Pizza Hut’s new Beyond Meat plant-based Italian sausage was confirmed by its parent company, Yum Brands. The vegan sausage at Pizza Hut is the latest item to arrive in one of Yum Brands’ fast-food franchises since signing a deal with Beyond Meat.

So far, the American alternative meat manufacturer has already supplied plant-based ingredients and food items to other Yum Brands restaurants including KFC and Taco Bell.

Through its partnership with Beyond Meat, Pizza Hut is hoping to gain more customers who are vegans or those who prefer to eat less meat. This is also beneficial to Beyond as it can also find new customers once they try out the products via Pizza Hut’s plant-based menu offerings.

Prior to the launch of Beyond Italian sausage at Pizza Hut stores in Canada, the food item was tried first in select locations - in Toronto and Edmonton. The test was carried out last summer and diners got to try out the Beyond Italian Sausage Crumbles on pizzas.

It was revealed that Canada is the second market to have Beyond Meat as a permanent item on the menu. The first region was in the United Kingdom when the plant-based option was added to Pizza Hut’s food lineup in July of last year.

Finally, while both Pizza Hut and Beyond Meat are American companies, the former has yet to add the Beyond plant-based pepperoni to its US restaurants nationwide. It was only tested in five cities but a roll out throughout the States has yet to be announced.

“After seeing great excitement from Pizza Hut fans across Toronto and Edmonton last summer, we’re beyond thrilled to give Canadian fans everywhere the opportunity to try and fall in love with these Beyond Meat menu items,” Pizza Hut Canada’s head of consumer marketing, Amy Rozinsky, said in a press release. “Pizza Hut and Beyond Meat have a shared vision to innovate new and exciting products that will delight our guests. Beyond Italian Sausage Crumbles offer a delicious plant-based twist on our classic pork sausage that you’ll have to taste to believe.”