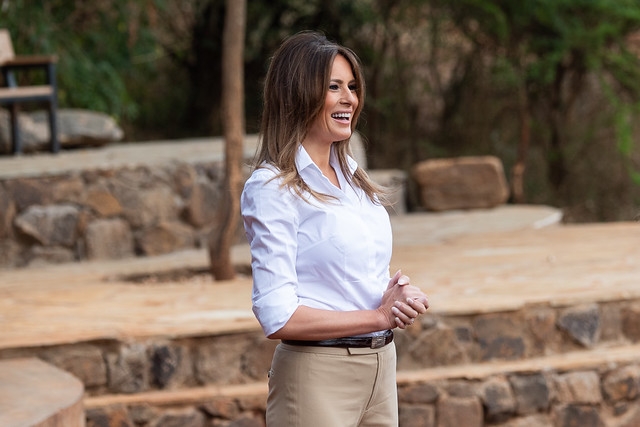 Melania Trump was snubbed and rejected by Vogue’s editor-in-chief Anna Wintour when the latter vowed that the FLOTUS will never find herself on the cover of their famed magazine again. The First Lady responded to such hurtful comment through her spokeswoman and gave a statement early this week.

Stephanie Grisham, Melania Trump’s spokesperson said in a statement that the cover of the fashion magazine does not define the former model. She added that Mrs.Trump has been there anyway, a long time ago, before she became the First Lady of the United States.

“To be on the cover of Vogue doesn’t define Mrs. Trump, she’s been there, done that long before she was the first lady,” HuffPost quoted Grisham as saying via a letter sent through email. “Her role as First Lady of the United States and all that she does is much more important than some superficial photo shoot and cover.”

Melania Trump’s spokesperson went on to say that Vogue’s Annan Wintour is a small-minded person for saying such things. “This just further demonstrates how biased the fashion magazine industry is, and shows how insecure and small-minded Anna Wintour really is but unfortunately, Mrs.Trump is used to this kind of divisive behavior,” Grisham remarked.

The conflict began when Anna Wintour had a conversation with CNN anchor Christine Amanpour. The journalist told Wintour that she noticed more Democratic women were featured than the Republicans and the Vogue chief explained the reason for this.

“As I said before, I think it’s very important to have a point of view,” Wintour stated. “We profile women in the magazine that we believe in the stand that they’re taking on issues we support them in the fact that we feel that they are leaders.”

While the comment did not explicitly state that Melania Trump will never be on the mag’s cover for being the FLOTUS, Donald Trump’s wife’s office interpreted it that way according to the report. Thus, the bitter response was fired back.

Meanwhile, Melania Trump said that she loves what she does as the FLOTUS. In a report by The Daily Mail, she said that being the first lady is a privilege because she always has the chance to spread positivity. She also told a group of school children when she visited the Albritton Middle School on Monday that she is a mother first but would love to serve as the first lady again.