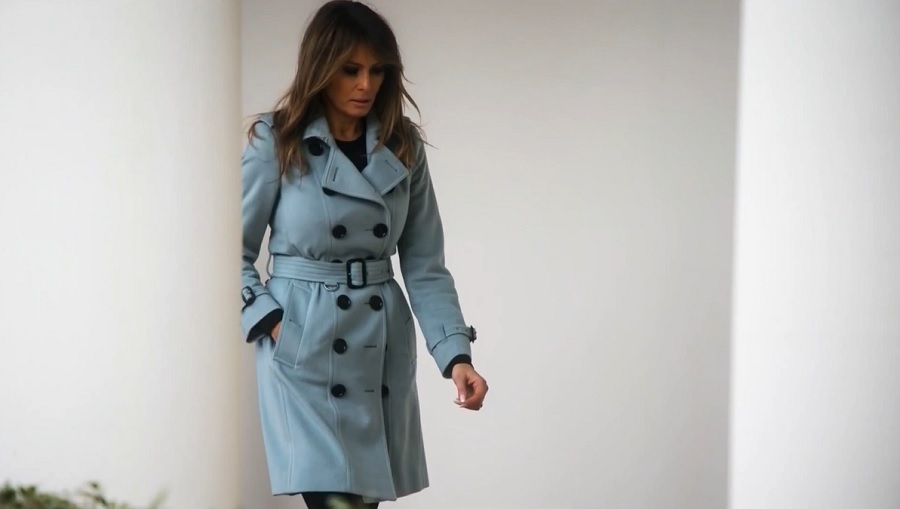 From a promo clip of CNN’s “Woman of Mystery: Melania Trump” special by Kate Bennett | Photo via nch/YouTube screenshot

Melania Trump’s commemoration of the September 11 attacks’ 18th anniversary has been marred with yet another fashion-related controversy. Online critics claimed that the stitch work on the back portion of the First Lady’s coat worn for a White House official photo sends an inappropriate message concerning the tragic occasion.

In 2001, terrorist group Al-Qaeda claimed responsibility on four coordinated attacks where hijacked passenger airlines were crashed on to the North and South towers of WTC. It left almost 3,000 people killed and 6,000 more were injured.

United States President Donald Trump shared a photo on Twitter with himself and the First Lady from last year’s ceremonies in Pennsylvania to commemorate the tragic events that took place on Sept. 11, 2001. However, online critics have since been focused on what seems like embroidery on the rear side of the coat that Mrs. Trump wore at the time.

Many Twitter users have called out the First Lady claiming that the stitch work resembled one of the World Trade Center towers getting hit by a hijackers’ plane. It has since sparked another online controversy with many critics claiming that posting the photo was inappropriate, especially since it was for the 9/11 anniversary.

Since the online flak went viral, White House press secretary Stephanie Grisham has since dismissed the issue calling the criticisms aimed at Trump to be “ridiculous.” Meanwhile, upon closer inspection on the photo, what the critics claimed to look like an airplane crashing into a tower looks similar to the stitching around the buttonholes in the midsection of the coat.

This is not the first time that Trump met online backlash for her fashion choices. In 2018, critics called out the First Lady after she wore a Zara jacket with the printed text on the back “I REALLY DON’T CARE, DO U?” Grisham, who also serves as Mrs. Trump’s communications director, said at the time that wearing the jacket had no hidden message.

PHOTO: First lady Melania Trump returns to Washington after visiting a detention center for immigrant children in Texas. Her choice of jacket from Zara caused a stir. #APphoto by @andyharnik. pic.twitter.com/onfSqe90AI

However, Donald Trump later tweeted that it was his wife’s way of calling out the “fake news media.” A few months later, Mrs. Trump also admitted in an interview with ABC News, “It was for the people and for the left-wing media who are criticizing me.” Now, online critics are comparing this situation with the coat she is seen wearing in the 9/11 commemoration photo.