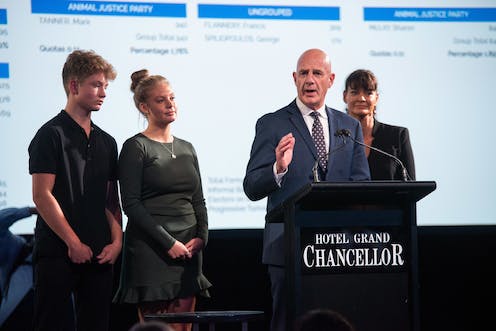 Tasmania uses the Hare-Clark system, with five electorates each returning five members. A quota is one-sixth of the vote, or 16.7%.

In The Poll Bludger’s projections, the Liberals are on 3.6 quotas in Bass, Labor 1.6 and the Greens 0.6. The Liberals will win three, Labor one and the last is Labor vs Greens.

In Braddon, the Liberals have 3.4 quotas, Labor 1.6, the Greens 0.3 and an independent 0.4. The most likely result is three Liberals and two Labor.

Finally in Clark, the Liberals have 1.9 quotas, Labor 1.3, the Greens 1.2 and Independents Kristie Johnston and Sue Hickey 0.7 and 0.6 respectively. If this projection holds up, it is hard to see the Liberals not getting two Clark seats and a majority.

Adding it up, the most probable result of the Tasmanian election is 13 Liberals (steady since the 2018 election), eight Labor, two Greens, one Labor vs Greens in Bass and one independent in Clark (Hickey or Johnston).

Gutwein gambled that his COVID popularity would get the Liberals to a majority while it remained an issue. It looks as if his gamble has succeeded. The Liberals are likely to retain government in Tasmania for a third term, while the same party is in power federally. This is a big achievement in a state that voted for Labor by 56.0-44.0 at the 2019 federal election.

This commissioned poll was too low on the Liberals and too high on Labor and independents.

Preferences have not yet been distributed for either seat, but Labor will clearly retain Derwent while the Liberals are likely to gain Windermere. The upper house will retain its 9-6 left-right split.

FiveThirtyEight has ratings of presidents since Harry Truman (president from 1945-53). At this stage of their presidencies, Biden’s net approval is only ahead of Donald Trump and Gerald Ford (who took over after Richard Nixon’s resignation in 1974).

The US economy, boosted by stimulus payments, appears to be recovering very well from COVID, but attempted illegal immigration has surged since Biden became president. The key question is how Biden’s ratings look at the November 2022 midterms, when the president’s party normally loses seats.