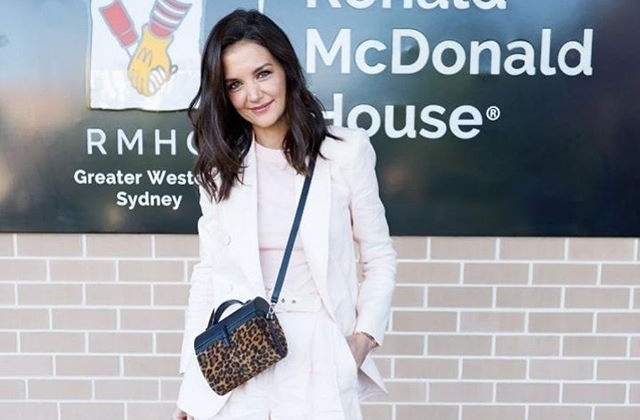 Katie Holmes and Emilio Vitolo have started dating a few months ago. While they have been in a relationship not too long, some people who see them commented that they are so in love with each other, and the public could not agree more as photos of their PDA-filled dates are on front pages of magazines.

Now it was reported that Katie Holmes and Emilio Vitolo Jr. are set to welcome their first child soon! In simple terms, the couple is allegedly pregnant already!

Katie’s wish to have another baby

As per Australia’s Woman’s Day, Katie Holmes has been wanting to have another child even when she was still in a relationship with Jamie Foxx. It was said that at that time when she was still dating the “Django Unchained” actor, she even begged for them to conceive already; however, he was not interested and turned down her request.

But with her new chef boyfriend, things are different since he is willing. It was alleged that Katie Holmes has been very public with her show of affection because it is part of her efforts to make her wish of having another child come true.

“Katie doesn’t want to waste time in her whirlwind romance and she’s doing everything she can to get pregnant with him,” the insider told the Australian magazine. “She is laying on the public displays of affection in her bid for a much-longed-for second child.”

The magazine wrote they think Katie Holmes is already pregnant and backed up this claim by saying that a witness saw Suri Cruise’s mom in Central park and revealed to them that the actress “was touching her tummy a lot and was cautious about where she stepped.”

It was added that the way she moves is very different from her usual energetic self. The witness supposedly further told Woman’s Day that Katie’s coat does not fit around her tummy, and she was struggling to keep it wrapped around her.

Gossip Cop pointed out that the magazine’s only proof of its allegations that Katie Holmes is pregnant was an onlookers’ account. This witness has not been identified, plus the actress was only touching her tummy, and it was already assumed that the 41-year-old “Dawson’s Creek” star is pregnant.

With that suspicious claims, Gossip Cop totally thinks that this narrative is not true. The proofs presented in the article are quite laughable, and this is not the first time that WD published a false article about Katie Holmes and her pregnancy. As it turned out, those write-ups are false since Suri Cruise still has no sibling up to now.