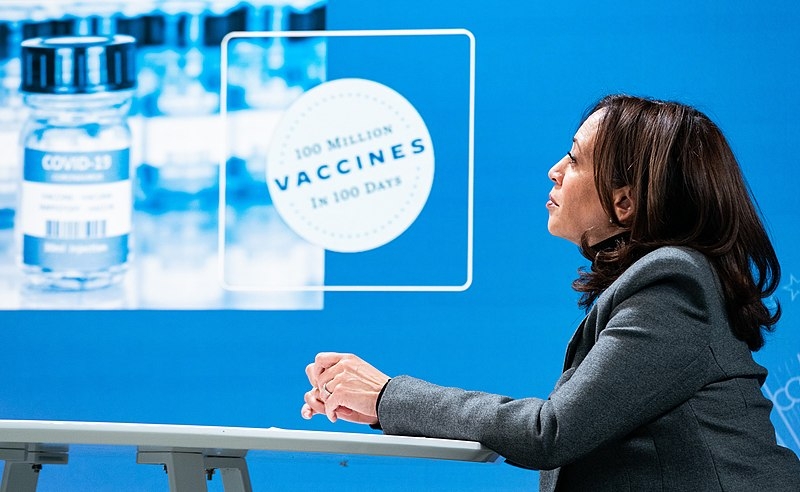 As more than 100 million doses of the COVID-19 vaccine have already been administered, more Americans are being encouraged to receive a shot. Vice President Kamala Harris addressed COVID-19 vaccine equity in her first official visit to Chicago this week.

Harris arrived in Chicago Tuesday, following the invitation of Chicago Mayor Lori Lightfoot for the vice president to come and visit. Harris visited a union hall in Chinatown that was currently being used as a vaccination site, thanking union members for getting vaccinated while also asking them to encourage their peers and family members to receive a shot when they can. The vice president’s visit comes on the same day Joe Biden announced that all adults will be eligible for a COVID-19 vaccine by April 19.

Speaking with ABC7’s Craig Wall following her visit to the vaccination site, Harris was pressed on why Chicago has not been receiving more vaccine doses despite the administration’s commitment to equity. Harris said that the city is set to receive more vaccines, noting that more vaccine doses are being sent to the state and Biden’s announcement that more resources are being sent to the states. The CDC is sending over $90 million to the state with almost $34 million to Chicago to increase access to the COVID-19 vaccine.

While Harris side-stepped the concern of having “vaccine passports,” she maintained that the administration’s focus is to make sure all Americans receive their shot. Harris also expressed disagreement with states like Indiana that lifted its mask mandate. “Wearing a mask will save your life and the life of people around you and it’s just a smart thing to do,” said the vice president.

In other news, Harris also received a Resolute Desk of her own this week, built by the Navy from parts of historic US warship, the USS Constitution that was commissioned by George Washington in 1794. Former President Donald Trump’s desk in his post-White House office in Florida also resembled the Resolute Desk in the Oval Office featuring a piece of metal used to build the wall at the southern border.

Users on social media were quick to compare the difference between the two desks. One user described the photo with Trump behind his Resolute Desk replica as “sad” while another user said that the former president “has no taste.” Others praised the new addition to Harris’s office, noting Harris’s historic election victory.