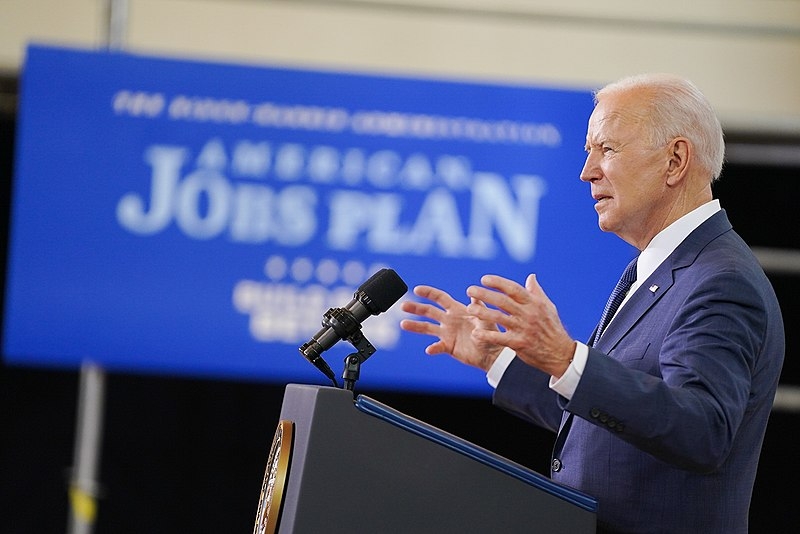 President Joe Biden is now set on promoting his upcoming infrastructure plan, another major piece of legislation he seeks to pass in Congress and the Senate. In his White House address, Biden made a reference to a long-running joke from the Trump-era in his touting of his massive American Jobs Plan.

Biden promoted his $2 trillion American Jobs Plan that would make investments in improving the country’s infrastructure in his address at the White House last week. In his address, Biden also referenced a long-running joke against his predecessor Donald Trump without mentioning him by name.

Biden then went on to detail the difference between his plan and his predecessor’s plan for infrastructure, noting the proposed investments that would be made towards VA hospitals, research and development, as well as other aspects like care for the elderly, climate change, and protection of public lands.

In the aspect of battling climate change, $10 billion from the plan would be used to establish a federal Civilian Climate Corps, which the White House describes would put together “the next generation of conservation and resilience workers.”

In other news, an expert claimed that Biden is likely to support the argument made by the United Kingdom regarding the Northern Ireland Protocol. Center for Brexit Policy Director-General John Longworth explained that Biden will agree with the UK in that the European Union is the one violating the Protocol, noting Biden’s knowledge of the Good Friday Agreement and its function.

Longworth also noted that while Biden’s ties to Ireland may have raised concerns as to whether or not he would support the UK, the fact that Biden is involved and is aware of the situation regarding Northern Ireland would make him likely to support the UK in the dispute.

Longworth noted that he had shown caution in his response to the protocol. Longworth went on to claim that Biden will see that the European Union is the one in violation of the Northern Ireland Protocol and not the UK.