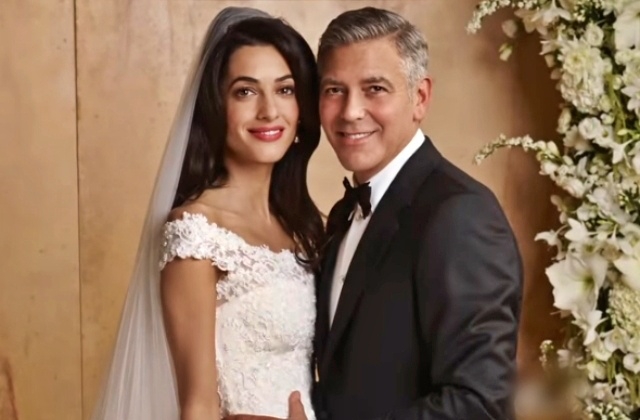 George Clooney and Amal Alamuddin are one of the biggest names in Hollywood. Although the “Batman” star’s wife is a barrister, she is being considered as a Hollywood A-lister too since she’s married to one.

George Clooney and Amal were married in 2014 and last year it was reported that they are renewing their wedding vows to mark their fifth anniversary. Based on the report that was published in the National Enquirer titled “Clooneys Already Renewing Vows!” it was claimed that to celebrate their fifth year together as husband and wife, they decided to hold their second wedding.

It was alleged that the wedding is taking place in their sprawling home in Los Angeles. The couple is also inviting equally A-list personalities and celebrities for the occasion.

“Their romance has evolved so much since they first tied the knot and while it has not always been smooth sailing, it’s made them stronger,” the insider divulged to the tabloid. “George wants Amal and the world to see how committed he is to spending the rest of their lives together.”

Friends was another reason George wants to renew their vows

The source said that in their first wedding many of the couple’s friends were not able to attend. George Clooney is said to be regretting this so he wants to hold the ceremony again and have his friends over.

“George wants to set that right,” the insider snitched. “It always burned him that only a few of their best pals were able to celebrate the most important moment of his life with them so he just wants to do it again!”

The truth about George and Amal’s renewal of vow

Now, Gossip Cop steps in to clarify this report. It has been a year since the original article came out and yet there is no news about the wedding.

Did George Clooney and Amal really renewed their vows last year? The answer is “no” and this is why GC is debunking this report. There was no wedding and in truth, the couple celebrated their fifth anniversary with a simple celebration.

They had dinner with their close friends Rande Gerber and Cindy Crawford. They dined at the Charles Prime Rib and hanged out for a few hours.