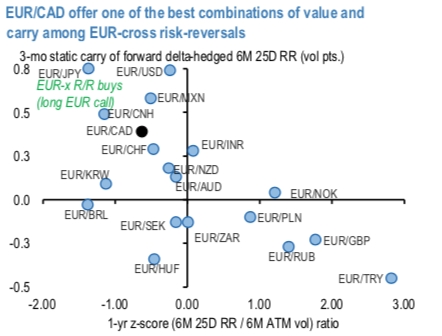 Ever since the low-likelihood threat of a US government shutdown became reality earlier in the year, our macro team has worried about another President Trump vs. Democratic House confrontation upending what was considered to be routine Congressional ratification of 2018's USMCA trade agreement. Last week’s FX Markets Weekly noted that the administration is minded to complete the process by August, but this compressed timeline could put the President on a collision course with House Speaker Nancy Pelosi sooner rather than later. Risks are that Trump actually withdraws from NAFTA 1.0 as a negotiating tactic in order to force the issue with the House – an option he and ranking members have been vocal about – leading to punitive sell-offs in CAD and MXN.

Aside from the flatter term structure that helps to extend option tenors without incurring much roll cost, the principal advantage of EURCAD riskies over USDCAD is their substantial positive carry when bought in delta-hedged format. Unsurprisingly, the source of this carry is elevated.

Euro forward points: close-to-zero risk-reversals incur very little time decay on a naked basis, while the forward delta- hedge (short EURCAD forward) earns substantially more interest rate carry. The net result is that delta-hedged EURCAD riskies are meaningfully positive carry instruments, in contrast to USDCAD riskies that incur both negative smile theta and negative points carry on the delta hedge on account of higher US rates than Canada’s. Since high Euro points are the principal driver of this carry advantage in EUR-cross risk-reversals, the skew vs. forward carry disconnect exists to varying degrees across the entire EUR/high-beta FX universe and is not limited to EURCAD; the latter only stands out on valuation screens because of their eye-catchingly depressed skew levels (refer above chart). The chart shows that EURMXN riskies are also almost equally well-priced, and present an even bigger skew vs. forward point disconnect than EURCAD; they can be particularly useful overlays on Mexican bond longs that are well represented in most global bond portfolios. Courtesy: JPM

Currency Strength Index: FxWirePro's hourly EUR spot index is flashing at 54 levels (which is bullish), hourly USD spot index was at -41 (bearish) and CAD is at -87 (bearish), while articulating at (12:03 GMT).