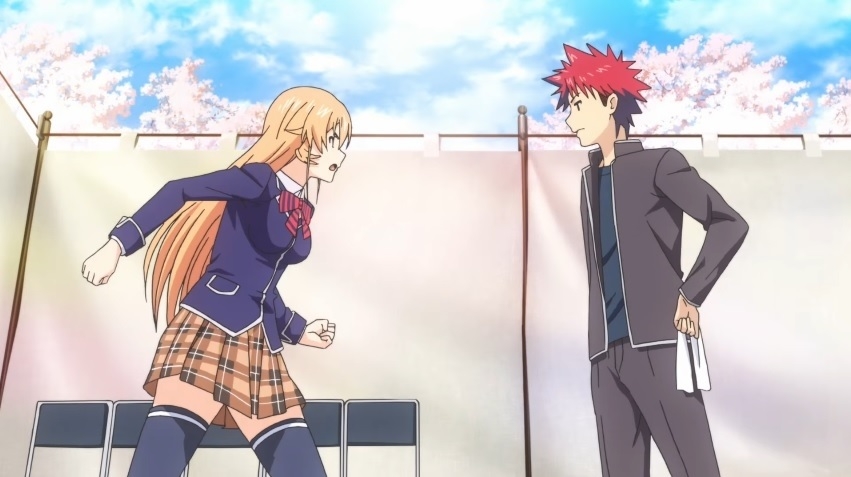 ​Anime-only fans have been excited to see how the series ends, and one reason is to find out how Erina and Soma’s relationship will develop in the final arc. The show, however, has been postponed until summer due to COVID-19. To those who cannot wait until then to see if they end up together, the manga could provide an answer.

‘Food Wars’ season 5 spoilers: Will Erina and Soma end up together?

The latest “Food Wars” season 5 episode showed Suzuki and Soma entering an informal shokugeki. The latter got visibly more motivated after the cryptic teacher declared possession of Erina to which Soma retaliated by saying Erina belongs to him. The new director of Totsuki was shocked to the point of passing out from what she heard, and in the manga, this marked the beginning of Erina often appearing confused about how she feels toward Soma.

“Food Wars” season 5 will likely adapt the moments from the manga’s final arc where Erina and Soma would have conversations about staying by each other’s side. However, establishing a romantic relationship was never explicitly mentioned in the manga as their relationship is always bonded by their passion for cooking and the desire to develop their skills.

Many manga readers were not satisfied with how the story ended. One of the likely reasons was the vagueness around the relationship between Soma and Erina in the end. Even the three-part epilogue did not clearly say whether the two started dating. However, they seem to be much more closer; Erina was no longer shy about wondering when would Soma respond to her messages. It also seemed like Soma entrusted the Yukihira diner to Erina’s care while he goes on a culinary journey around the world.

Many manga fans are hoping to see an original ending in “Food Wars” season 5, including a part where Soma and Erina will clearly end up together as a couple. This does not seem like a longshot now that several sequences of events from the manga have been changed in the anime. The Fifth Plate has also tweaked several important stories in the final arc, such as how Erina, Soma, Megumi, and Takumi were chosen to compete in BLUE.

‘Food Wars’ season 5 postponed: When will the anime return?

Fans will have to muster more patient, though. What was initially thought to be a few weeks postponement is now confirmed to last for more than two months. Producers confirmed that “Food Wars” season 5 will not return to its regular broadcast schedule until July. The specific date has yet to be finalized as well.