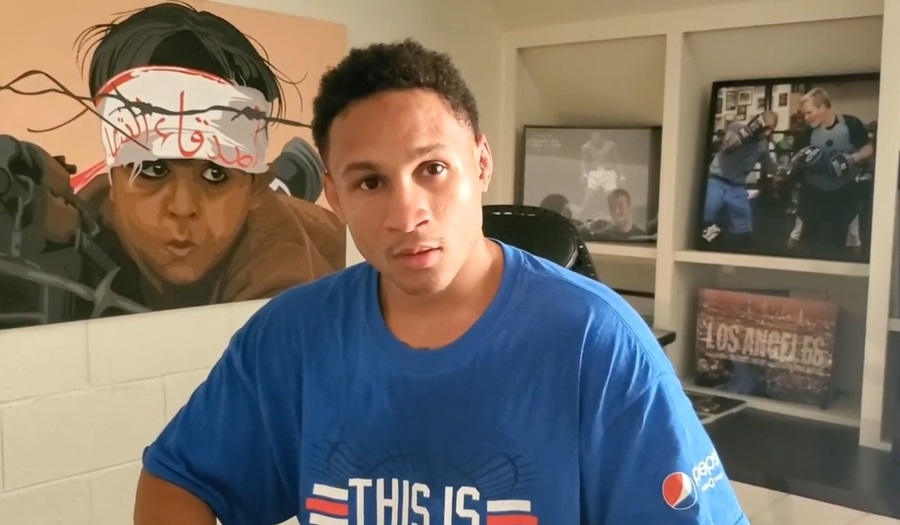 Photo via Screenshot of FightersRep/Youtube

Errol Spence Jr’s match against Shawn Porter is inching closer, and the boxing world is eager to see how the fight unfolds. At the moment, the former is the favorite to win the match having several advantages over the latter.

Odds Shark has Errol Spence Jr at a minus-900 favorite, and it appears that WBA light-welterweight champion Regis Prograis is backing up these numbers. Prograis believes that the only one who can potentially beat Spence at welterweight is Terence Crawford.

“The only person I can see maybe giving him some kind of trouble, and I could be wrong, is Terence Crawford, but I still think he [Errol Spence Jr] would beat him too, because of his size. I think Crawford’s skill is better, but as far as size-wise, and punching power, I would always give it to Spence,” Prograis told FightHype.

Errol Spence Jr wants to be the aggressor against Porter

It can be recalled that the 29-year-old champion said that although Crawford isn’t on his priority list at the moment – he’s aiming to fight Manny Pacquiao after Porter – he’s still planning to fight him in the future. As for Porter, Errol Spence Jr said that his goal is to knock the WBC champion out. He added that he’s not just going to outbox Porter, he means to be the aggressor this time around, which would be interesting given what he did to Mikey Garcia.

For his part, Porter said that he’s ready to collide with Errol Spence Jr as he’s at his best shape right now. But the most interesting weapon that Porter has in his arsenal is Barry Hunter, PBC reported.

Hunter previously worked with Errol Spence Jr in the past and has a solid idea what sort of fighter he is. Porter said that he received specific instructions from Hunter on what strike to unload that would hurt the IBF Welterweight champion.

The problem for Porter is that he’s at a height and reach disadvantage. That means he’ll be the one who will be pushing forward, which is bad news for him since Errol Spence Jr thrives when his opponent is seeking to throw hands. With the bout slated to take place on Sept. 28, the boxing scene is ecstatic what sort of fireworks this match will unleash, especially since Spence has a penchant to knock people out.