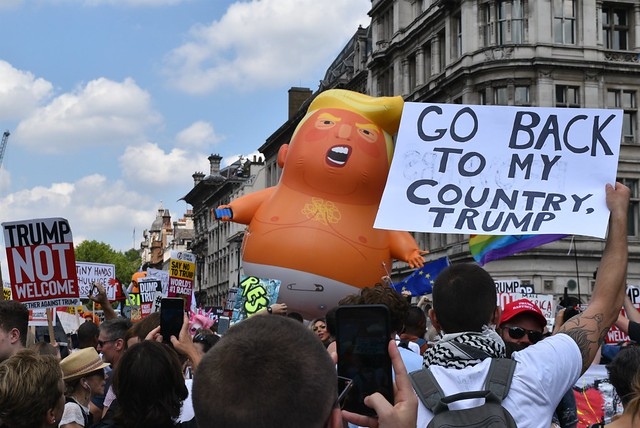 The so-called "Trump Baby" blimp as used by anti-Trump protesters in London in July 2018. | Photo by Loco Steve (licensed under CC BY-SA 2.0) via Flickr.com

Donald Trump, the President of the United States, has always had an intriguing stand on climate change. But he revealed that it was actually one of the topics he discusses with Prince Charles during his official state visit in the United Kingdom.

It appears that not even Prince Charles can convince that Trump has a major role to play in the global efforts to remedy the devastating effects of climate change. He instead insisted that the U.S. is one of the countries with “cleanest climates” before passing the blame on other territories.

“[Prince Charles] is really into climate change and I think that’s great. … He wants to make sure future generations have climate that is good climate, as opposed to a disaster, and I agree,” Trump told Piers Morgan on Good Morning Britain. “I did say, ‘Well, the United States right now has among the cleanest climates there are based on all statistics.’”

Does the US President believe in climate change?

Trump says he discussed climate change with Prince Charles, who he believes is 'a very good person' who 'wants to have a world that's good for future generations'. pic.twitter.com/QNlXhiS1mO

However, in the “State of Air” report published by the American Lung Association this year, 4 out of 10 Americans or equivalent to over 141 million were inhaling “unhealthy air” in the U.S. from 2015-2017. “Climate change makes it harder to protect human health. This year’s report shows the spike in high ozone days and in unhealthy particle pollution episodes driven by wildfires,” the report reads. “Too many cities suffered increased ozone from the increased temperature and continued high particle pollution from wildfires driven by changing rain patterns.”

POTUS then added that other countries like China, India, and Russia are the ones who should take action for having a worse environmental condition than the U.S., at least, according to Trump. “They have not very good air, not very good water, and the sense of pollution,” he added.

Two years ago, Trump officially backed out from the 2015 Paris Agreement. It is an accord signed by 196 nations (including the U.S.) in 2016 that reached a consensus of mitigating the growing issues on greenhouse gas emissions. Outgoing UK Prime Minister Theresa May said at the time, “I have spoken to Donald Trump and told him that the UK believes in the Paris agreement."