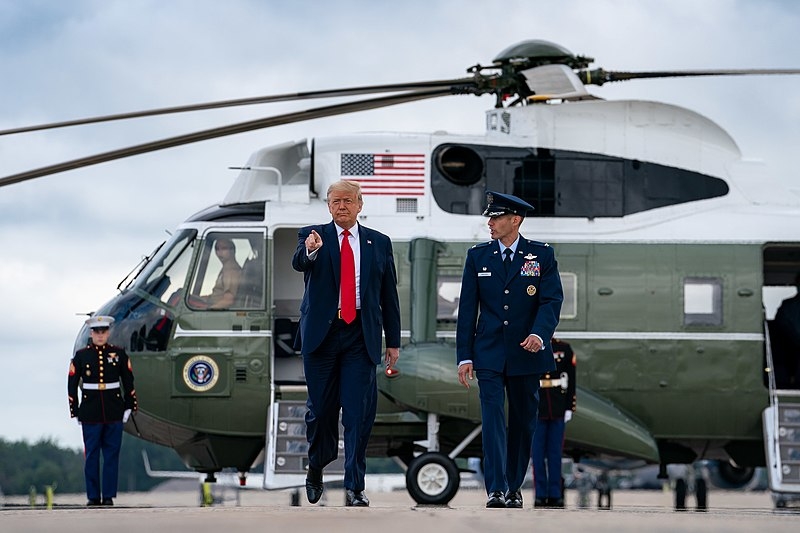 Throughout the pandemic, Donald Trump has infamously refused to wear a face mask when going out in public. However, it appears that the president had changed his tune somewhat when he was spotted out in public wearing a mask for the first time.

BBC reports Trump was seen wearing a face mask as he visited the Walter Reed Military Hospital outside Washington over the weekend. Trump met and spoke with wounded soldiers and healthcare workers. Infamously known for refusing to wear a mask in public, Trump, as well as his supporters, have attacked former vice president Joe Biden for doing so when meeting with his supporters outside. Prior to leaving the White House, Trump said to the press that he believes there is an appropriate time and place for wearing a mask, and said that he was never against wearing a face mask.

“I think when you’re in a hospital, especially in that particular setting, where you’re talking to a lot of soldiers and people that, in some cases, just got off the operating tables, I think it’s a great thing to wear a mask,” said Trump.

The United States hit a new daily record of coronavirus cases, at 66, 528. The death toll from the coronavirus in the country has surpassed 137,000, making the US the worst-hit country by the pandemic. Some aides have previously reportedly asked Trump to wear a face mask, however, Trump refused.

Health experts have already stressed the importance of wearing a face mask out in public, especially in places where social distancing could not be practiced.

Trump also defended his frequent golf playing on Twitter, saying that it was his form of exercise. The president also claimed that his predecessor Barack Obama played more rounds of golf in his eight years of presidency compared to him. Out of 1,276 days that Trump has been president, he has already played 276 rounds of golf compared to Obama, who played between 98 to 113 rounds in his first term of office.

Trump’s frequent golf-playing has earned him criticism across the board, especially as the number of cases and deaths from the pandemic has already gone to tens of thousands.