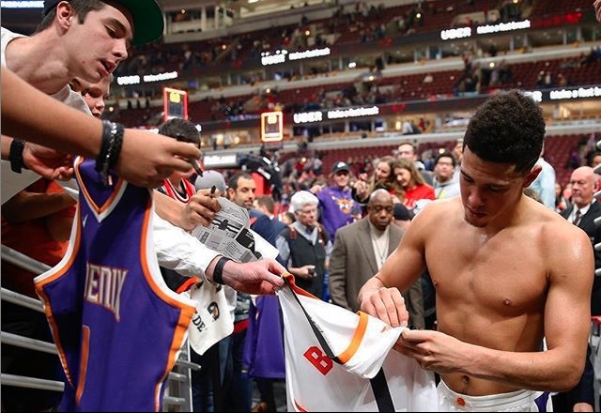 Devin Booker drained a buzzer-beater to allow the Phoenix Suns to squeak past the Los Angeles Clippers, 117-115, and earned the praise of Los Angeles Lakers LeBron James.

Shortly after Devin Booker sank the epic game winner on Tuesday night, August 4, inside the NBA bubble, James took to his social media account to applaud the young guard.

With the game tied at 115-all and the seconds trickling out, Booker didn't allow the game to go into overtime as he stayed cool in front of Kawhi Leonard and Paul George to pull up for the game-winning fadeaway jumper that cleanly swished through the net.

James was not the only one who took to social media to applaud Booker.

Bradley Beal of the Washington Wizards, Donovan Mitchell of the Utah Jazz, JJ Redick of New Orleans Pelicans, Trae Young of the Atlanta Hawks, CJ McCollum of the Portland Trail Blazers, Jared Dudley of the Los Angeles Lakers, and Kendrick Perkins of the Boston Celtics are only a few of the players who heaped praises on Booker.

Now, no one is questioning why the Phoenix Suns have been made a part of the 22 teams who have been invited to the NBA restart inside the NBA bubble at the Disney World in Orlando, Florida as they now have gone up 3-0 and made the battle for the 8th spot in the Western Conference a tight one.

Devin Booker ensured that the Phoenix Suns stay in contention for that last Playoffs spot as they are just three games behind the Memphis Grizzlies. The Suns now have a win-loss record of 29-39.

Although things may not be easy for the Suns moving forward as their remaining games will be against Indiana Pacers, Oklahoma City Thunder and Dallas Mavericks, but then again, who would have thought that they would stay in contention.

The loss put the LA Clippers just one game ahead of the Denver Nuggets.

Booker finished with 35 points, four rebounds and eight assists and now averages 30.6 points per game while inside the bubble.

And, perhaps it is only but fitting for James to give Devin Booker a shout-out as the young guard has tied him in the number of game-winning buzzer-beaters at three since he joined the NBA in 2015. James also had three in the same span.