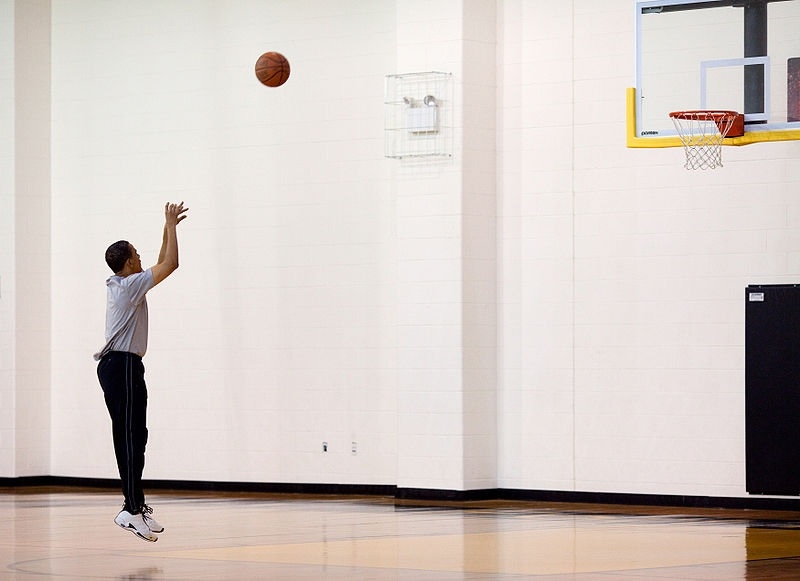 President Barack Obama is photographed while warming up before a basketball game at Fort McNair in Washington, D.C. on May 9, 2009. | Credit: Official White House Photo by Pete Souza (Public domain) via Wikimedia Commons

From attending collegiate to professional basketball games and countless photos of him on the court, Barack Obama’s love for basketball should not surprise anyone. However, he had a very important reason for practically retiring from hosting pick-up basketball games at the White House.

Barack Obama: Why he later decided to stop playing basketball while in the White House

In the earlier years of Obama’s White House term, the former President of the United States made headlines for his occasional pick-up ball plays. He has also been photographed playing with staffers, lawmakers, and even NBA stars.

Obama’s sport activity did not last throughout his eight-year term though, according to former White House communications director Dan Pfeiffer. But it was not because Obama lost interest in basketball altogether. There was a very reasonable explanation for why ex-POTUS refrained from hosting games later on in his presidency.

“There was a period of time where he kind of mostly retired from pick-up ball in the latter half of his presidency, just as he felt he was getting older and more afraid of injury,” Pfeiffer told Sports Illustrated. “He described it to me once that as you get older and you get slower, the risk of injury exceeds the benefits of playing.”

Obama’s concern is a legitimate one, especially if one would recall the time when he needed 12 stitches. During a pick-up match in 2010, Obama got elbowed on the lip while playing against Rey Decerega, then-Director of Programs at the Congressional Hispanic Caucus Institute. Decerega did not get in any trouble for the incident. But it still made headlines because it is not every day that one of the most powerful men in the world gets injured during a friendly game of basketball.

The White House basketball games seemed fun while they lasted though. On more special occasions, Pfeiffer recalled having active NBA stars and some NBA legends coming out of retirement to play basketball with the former president.

Big names who have retired from professional basketball like Scottie Pippen, Magic Johnson, and Alonzo Mourning went back on the court to play with Obama, Pfeiffer revealed. Obama’s White House games were also popular among active NBA stars. In a special game for his 50th birthday, a match was attended by LeBron James, Chris Paul, and Derrick Rose while Kobe Bryant watched on the sideline since he was nursing an injury at the time.