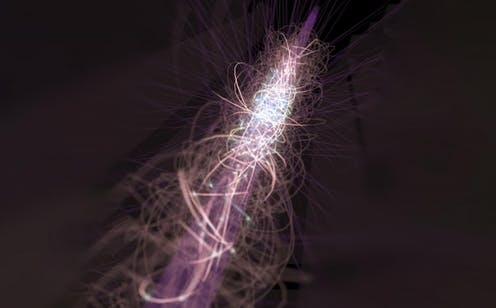 Cern scientists have successfully cooled antimatter with a laser for the first time. Chukman So, Author provided 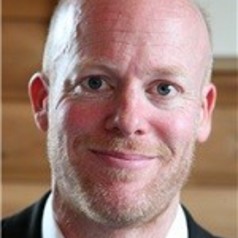 Antimatter is believed to play a huge part in the story of our universe. It’s the counterpart to matter: identical in every way – with protons, neutrons and electrons – but with an opposite electric charge. According to our best understanding of the laws of physics, the universe of today should be equally populated by both matter and antimatter.

Yet, as far as we can tell, it’s not. Antimatter is elusive, and one of the major conundrums in modern physics is how we can explain a “symmetrical” universe of equal parts matter and antimatter when, after decades of searching, the universe appears to be almost entirely void of antimatter.

To try to unravel this cosmic mystery, physicists are studying various features of antimatter. In particular, we’re interested in small differences between matter and antimatter that could explain the asymmetry we observe – in turn validating existing laws of physics.

But studying antimatter is incredibly difficult. It takes huge amounts of energy to create it, and even then it’s liable to disappear: annihilating itself when it comes into contact with the matter that surrounds us.

Research by my colleagues at Cern and I has produced a way to create, trap and laser-cool antimatter for long enough for us to target a whole new set of more accurate measurements. Our experiments could be a significant step in solving the mystery of the missing antimatter in our universe.

Just as matter is made up of atoms, antimatter is made up of antiatoms. The easiest antiatom to make is antihydrogen, first created by Cern in 1995 and first measured in 2012. Consisting of just one antielectron (called a positron) orbiting around a one antiproton nucleus, antihydrogen (and hydrogen, its counterpart in matter) has the simplest atomic structure in the universe.

But making antihydrogen isn’t easy. The classical high-energy physics approach to the problem uses a particle collider – like the LHC at Cern – to convert enormous amounts of kinetic energy into a plethora of sub-atomic shrapnel for us to study.

Particle accelerators can be used to create antiprotons. To make a single usable antiproton, though, we need 1 million protons and at least 26 million times the energy that’s eventually “stored” in an antiproton. This makes each antiproton we make incredibly precious.

Once we’d created enough antiprotons, we needed antielectrons (positrons) in order to build our antiatoms. Happily, positrons can be quite easily gathered from a radioactive source. With our core ingredients collected, we just needed to combine them.

This we achieved by forcing the antiprotons and positrons into contact within an electromagnetic trap. Crucially, this had to happen in a vacuum, because if the antiparticles were to make contact with any parts of the apparatus – which was of course made of matter – they’d simply annihilate on contact, disappearing altogether. Only after all of these steps could we form usable antihydrogen atoms, pinned in a vacuum by a combination of magnetic fields. 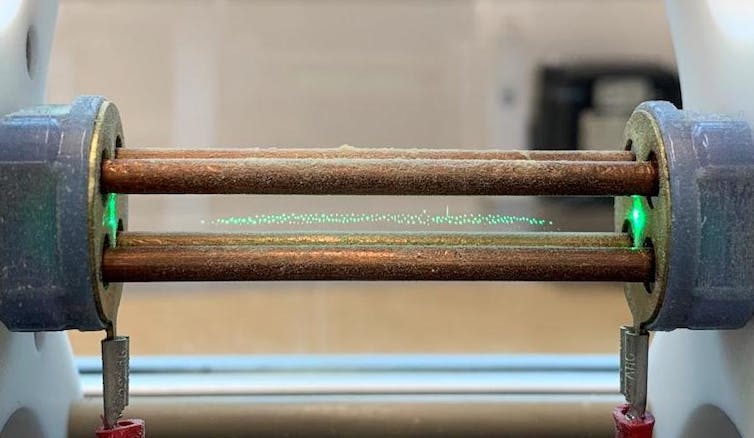 This demonstration of our electromagnetic trap shows how the forces it creates can hold charged particles in space. Niels Madsen, Author provided

We took our antihydrogen measurement to 12 decimal places of precision. This is worse than the most precise measurement of ordinary hydrogen by a factor of 1,000, but it’s currently the best measure of antihydrogen anyone has done.

But one key limitation of our measurement is the movement of the antiatoms in the trap itself, due to their kinetic energy. By reducing this movement further, our measurements would be far more accurate. Our experiment achieved this, for the first time, by blasting the antiatoms with laser light. 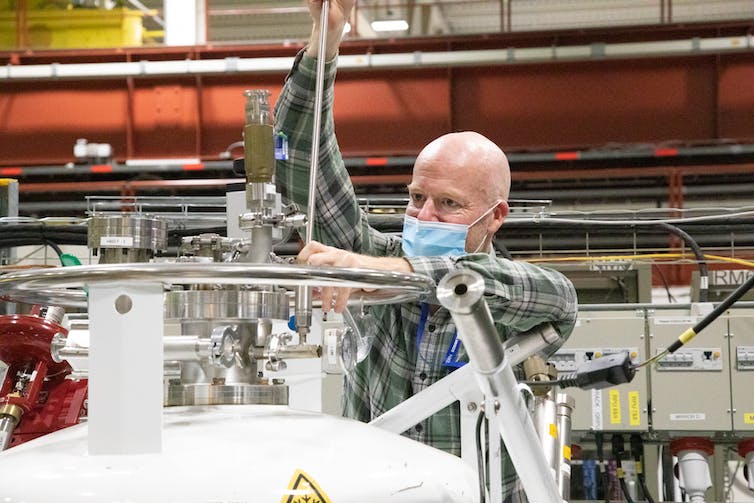 The light in a laser is made up of photons, which carry a momentum of their own. When an atom absorbs a photon, the atom’s velocity changes slightly. By following this basic principle, we knew we could use the momentum contained in our laser beam to reduce the kinetic energy of the trapped antiatoms – cooling them closer to absolute zero.

That required us to only hit the antiatoms with photons when they were moving towards the laser, as this would in effect cancel out some of the velocity of the antiatom: a bit like how you’d apply force to slow a child on a swing.

By using this targeted laser-cooling, we managed to reduce the temperature of our stored antihydrogen by a factor of ten, which has the potential to improve future measurement precision by a factor of four.

We’ve not yet made enough measurements to publish new, more precise data on antihydrogen – but that’s coming very soon. Beyond that, our laser-cooling technique has put us on a firm path towards higher precision in many measurements of both matter and antimatter, and takes us a step closer to making an even more precise measurement of hydrogen itself.

Laser-cooling opens up exciting possibilities for measuring antihydrogen. Combined with existing techniques that allow us to accumulate relatively large amounts of antihydrogen (thousands of antiatoms per day) we will soon know even more about the nature of antihydrogen – and that extra knowledge could help us understand why matter is everywhere in our universe, while antimatter is so elusive.