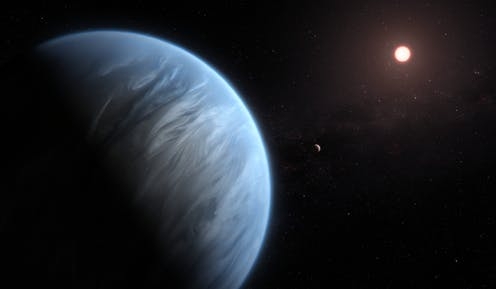 An artist's impression of an exoplanet in the habitable zone around a star. Credits: ESA/Hubble, M. Kornmesser 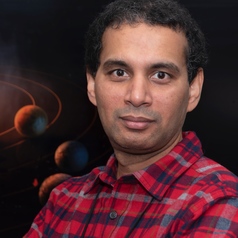 A few months ago a group of NASA exoplanet astronomers, who are in the business of discovering planets around other stars, called me into a secret meeting to tell me about a planet that had captured their interest. Because my expertise lies in modeling the climate of exoplanets, they asked me to figure out whether this new planet was habitable – a place where liquid water might exist.

These NASA colleagues, Josh Schlieder and his students Emily Gilbert, Tom Barclay and Elisa Quintana, had been studying data from TESS (Transiting Exoplanet Survey Satellite) when they discovered what may be TESS’ first known Earth-sized planet in a zone where liquid water could exist on the surface of a terrestrial planet. This is very exciting news because this new planet is relatively close to Earth, and it may be possible to observe its atmosphere with either the James Webb Space Telescope or ground-based large telescopes.

The host star of the planet that Gilbert’s team discovered is called TESS of Interest number 700, or TOI-700. Compared to the Sun, it is a small, dim star. It is 40% the size, only about 1/50 of the Sun’s brightness and is located about 100 light-years from Earth in the constellation Dorado, which is visible from our Southern Hemisphere. For comparison, the nearest star to us, Proxima Centauri, is 4.2 light-years away from Earth. To get a sense of these distances, if you were to travel on the fastest spacecraft (Parker Solar Probe) to reach Proxima Centauri, it would take nearly 20,000 years.

There are three planets around TOI-700: b, c and d. Planet d is Earth-size, within the star’s habitable zone and orbits TOI-700 every 37 days. My colleagues wanted me to create a climate model for Planet d using the known properties of the star and planet. Planets b and c are Earth-size and mini-Neptune-size, respectively. However, they orbit much closer to their host star, receiving 5 times and 2.6 times the starlight that our own Earth receives from the Sun. For comparison, Venus, a dry and hellishly hot world with surface temperature of approximately 860 degrees Fahrenheit, receives twice the sunlight of Earth.

Until about a decade ago, only two habitable zone planets of any size were known to astronomers: Earth and Mars. Within the last decade, however, thanks to discoveries made through both ground-based telescopes and the Kepler mission (which also looked for exoplanets from 2009 to 2019, but is now retired), astronomers have discovered about a dozen terrestrial-sized exoplanets. These are between half and two times larger than the Earth within the habitable zones of their host stars.

Despite the relatively large number of small exoplanet discoveries to date, the majority of stars are between 600 to 3,000 light-years away from Earth – too far and dim for detailed follow-up observation.

TESS has discovered its first Earth-size planet in its star’s habitable zone, the range of distances where conditions may be just right to allow the presence of liquid water on the surface.

Why is liquid water important for habitability?

Unlike Kepler, TESS’ mission is to search for planets around the Sun’s nearest neighbors: those bright enough for follow-up observations.

Between April 2018 and now, TESS discovered more than 1,500 planet candidates. Most are more than twice the size of Earth with orbits of less than 10 days. Earth, of course, takes 365 days to orbit around our Sun. As a result, the planets receive significantly more heat than Earth receives from the Sun and are too hot for liquid water to exist on the surface.

Liquid water is essential for habitability. It provides a medium for chemicals to interact with each other. While it is possible for exotic life to exist at higher pressures, or hotter temperatures – like the extremophiles found near hydro-thermal vents or the microbes found half a mile beneath the West Antarctic ice sheet – those discoveries were possible because humans were able to directly probe those extreme environments. They would not have been detectable from space.

When it comes to finding life, or even habitable conditions, beyond our solar system, humans depend entirely upon remote observations. Surface liquid water may create habitable conditions that can potentially promote life. These life forms can then interact with the atmosphere above, creating remotely detectable bio-signatures that Earth-based telescopes can detect. These bio-signatures could be current Earth-like gas compositions (oxygen, ozone, methane, carbon dioxide and water vapor), or the composition of ancient Earth 2.7 billion years ago (mostly methane and carbon dioxide, and no oxygen).

We know one such planet where this has already happened: Earth. Therefore, astronomers’ goal is to find those planets that are about Earth-size, orbiting at those distances from the star where water could exist in liquid form on the surface. These planets will be our primary targets to hunt for habitable worlds and signatures of life outside our solar system. 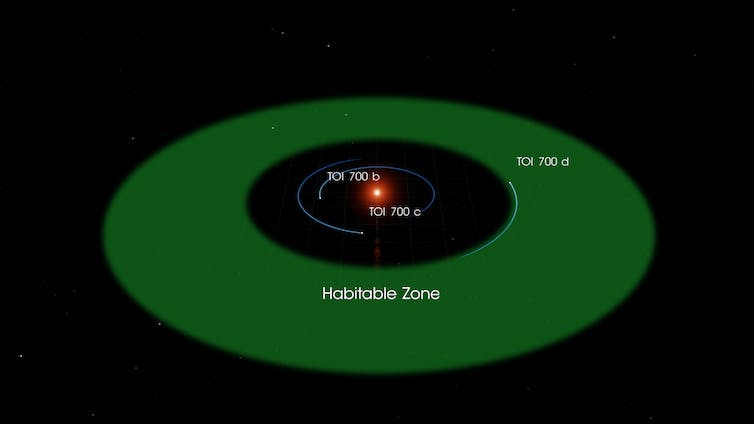 To prove that TOI-700 d is real, Gilbert’s team needed to confirm using data from a different type of telescope. TESS detects planets when they cross in front of the star, causing a dip in the starlight. However, such dips could also be created by other sources, such as spurious instrumental noise or binary stars in the background eclipsing each other, creating false positive signals. Independent observations came from Joey Rodriguez at Center for Astrophysics at Harvard University. Rodriguez and his team confirmed the TESS detection of TOI-700 d with the Spitzer telescope, and removed any remaining doubt that it is a genuine planet.

My student Gabrielle Engelmann-Suissa and I used our modeling software to figure out what type of climate might exist on planet TOI-700 d. Because we do not yet know what kind of gases this planet may actually have in its atmosphere, we use our climate models to explore possible gas combinations that would support liquid oceans on its surface. Engelmann-Suissa, with the help of my longtime collaborator Eric Wolf, tested various scenarios including the current Earth atmosphere (77% nitrogen, 21% oxygen, remaining methane and carbon dioxide), the composition of Earth’s atmosphere 2.7 billion years ago (mostly methane and carbon dioxide) and even a Martian atmosphere (a lot of carbon dioxide) as it possibly existed 3.5 billion years ago.

Based on our models, we found that if the atmosphere of planet TOI-700 d contains a combination of methane or carbon dioxide or water vapor, the planet could be habitable. Now our team needs to confirm these hypotheses with the James Webb Space Telescope.

Strange new worlds and their climates

The climate simulations our NASA team has completed suggest that an Earth-like atmosphere and gas pressure isn’t adequate to support liquid water on its surface. If we put the same quantity of greenhouse gases as we have on Earth on TOI-700 d, the surface temperature on this planet would still be below freezing.

Our own atmosphere supports a liquid ocean on Earth now because our star is quite big and brighter than TOI-700. One thing is for sure: All of our teams’ modeling indicates that the climates of planets around small and dim stars like TOI-700 are very unlike what we see on our Earth.

The field of exoplanets is now in a transitional era from discovering them to characterizing their atmospheres. In the history of astronomy, new techniques enable new observations of the universe including surprises like the discovery of hot-Jupiters and mini-Neptunes, which have no equivalent in our solar system. The stage is now set to observe the atmospheres of these planets to see which ones have conditions that support life.