Squatting against oppression: how refugees are fighting back against border controls 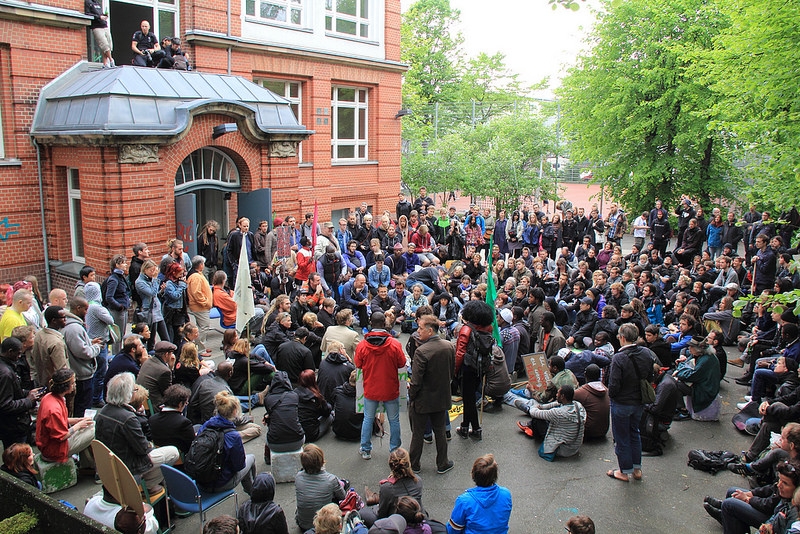 These very different approaches can, in fact, have similar effects. Talking of a “refugee crisis” and a “state of emergency” – whether it’s to drum up support for government policies, or encourage wealthy Europeans to donate to the cause – ultimately creates a climate of urgency, where migration is portrayed as a problem that needs to be solved using emergency measures.

These days, the borders of European countries aren’t simply marked by walls, fences and camps. Rather, a growing variety of actors and institutions are becoming informal border guards: from landlords and doctors, to employers and even teachers working in schools and universities.

This creates a hostile environment, where the migration status of every person is constantly monitored and reported to the authorities. In this way, border controls and surveillance become invisible yet all pervasive, embedded in everyday social life. As a result, those labelled as “illegal migrants” feel pressured to stay silent and invisible, living in constant fear of arrest, detention and deportation.

While many European governments are treating migration as a security threat, NGOs and charities have responded by framing it as a humanitarian emergency. In charity appeals, migrants are often portrayed as victims, who need to be saved and protected. This paternalistic approach is supported by a “spectacle of suffering”, which turns migrants into objects of compassion and piety.

Rather than addressing the global violence, dispossession and inequality that lie at the root of forced migration, these issues are depoliticised and reduced to a humanitarian problem requiring a humanitarian kind of solution. What’s more, it prevents European citizens from holding governments to account, when they should be taking responsibility for those harms. Both these approaches from governments and charities not only fail to address the need for global political change: they also overlook the fact that migrants can think, speak and act for themselves, creating their own social and political responses to their situation. As an activist and researcher, I investigate how so-called “illegal immigrants” are actively resisting the politics of borders, through one of the most visible forms of protest available: squatting.

In many European cities, including Amsterdam, Berlin, Calais and Athens, migrants and local activists have started squatting vacant buildings and urban spaces. As far back as 2012, isolated acts of protest had begun to morph into long-term, collective forms of action, with the formation of the We Are Here movement in the Netherlands.

We Are Here is a movement made up of undocumented migrants, whose requests for asylum have been rejected. Legally, they cannot be deported to the countries of origin, because the Dutch government considers these unsafe. Nor are they allowed to stay in the Netherlands. This has landed thousands of people in a political limbo, where they are denied access to basic needs including housing, health care, employment and education.

Instead of living on the streets, or being detained in state-run asylum centres, constantly monitored and isolated from society, a group of people decided to break the circuit of invisibility and oppression. They began squatting large vacant buildings, including a former church (Vluchtkerk), large offices (Vluchtkantoor, Vluchtgebow), a former school (Vluchtschool) and spaces owned by the city council (Vluchtgarage and Vluchtgemeente). We Are Here protest in Amsterdam. Hansfoto/Flickr, Author provided

These buildings were squatted not only to provide shelters, but also to create homes – spaces where so-called “illegal” migrants could feel safe and connect with one another. Through squatting, the We Are Here group have established grassroots communities, where migrants can organise their own spaces and their everyday lives.

Rather than being passive receivers of help, migrants are actively involved in organising the space, making decisions and running daily activities, including collective cooking, educational workshops, legal and medical consultations, as well as discussions and recreational events to raise awareness and to build connections with local communities.

The right to resist

By squatting, migrants can make their presence felt and their voices heard, rather than being silenced and invisible. Migrants who squat actively reclaim urban, social and political spaces, creating collective platforms to challenge government policies. The networks of solidarity emerging around squatted spaces do not just seek to help migrants to survive – they create places where the search for a dignified existence and political resistance go hand-in-hand.

In squatted spaces, the voices and needs of migrants are at the forefront, and migrants and supporters relate to each other as equals: a far cry from the saviour/victim relationship which exists between the givers and receivers of humanitarian aid. By squatting, migrants and solidarity networks challenge the social, cultural and political barriers, which would otherwise force them to lead fearful, silent and invisible lives.

By occupying spaces in the city, migrants are refusing to be seen as criminals or victims, while drawing attention to the real problems of inequality, violence and borders controls, which have been the source of so much harm. Although squatting buildings is not a long term solution, its does create the possibility for alternative social relations to emerge; solidarity instead of assistance; resistance instead of oppression.

Deanna Dadusc does not work for, consult, own shares in or receive funding from any company or organisation that would benefit from this article, and has disclosed no relevant affiliations beyond the academic appointment above.