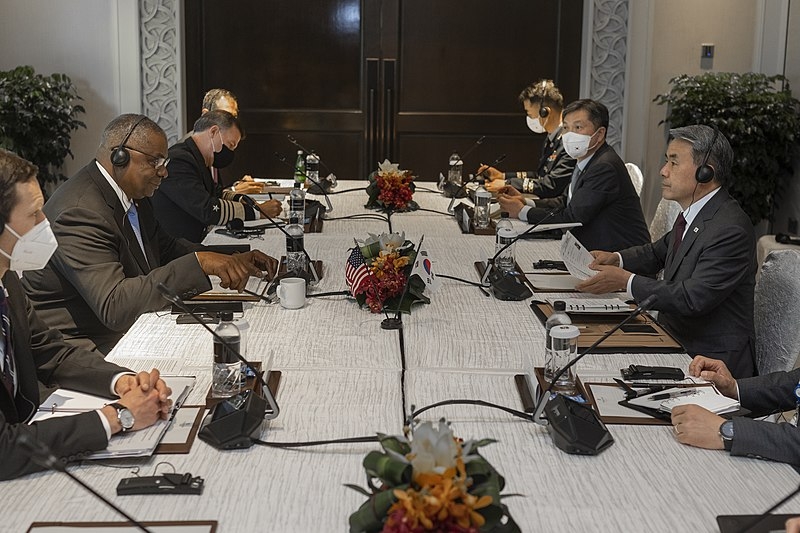 North Korea’s repeated missile tests have caused tensions in the Korean peninsula, with South Korea and Japan coordinating with the US to take action. South Korea’s defense chief said that his country would boost its defense capabilities to be able to counter Pyongyang.

Speaking at an Asian security meeting in Singapore, South Korean defense minister Lee Jong-sup said the current situation in the Korean peninsula is a global threat while urging North Korea to end its nuclear program.

“Moreover, we would like to strengthen security cooperation between South Korea, the US, and Japan to respond to North Korea’s nuclear and missile programs,” Lee added, noting that Seoul was prepared to extend economic support should Pyongyang end its nuclear program.

This comes amidst warnings from Washington that North Korea is planning to conduct its first nuclear test since 2017. Washington also said it would push for more sanctions on North Korea should Pyongyang proceed with the tests.

North Korean state media said Saturday that Pyongyang has promoted its key nuclear negotiator to become the isolated nation’s foreign minister. The report came amidst leader Kim Jong-un’s pledge during the Plenary Meeting of the Central Committee of the Worker’s Party of Korea to use “power for power” to fight the threats to North Korea’s sovereignty.

18 weapons tests have been carried out so far this year.

Pyongyang on Sunday was reported to fire multiple artillery shots, according to the South Korean military, in another show of force following Kim’s pledge.

The Joint Chiefs of Staff of South Korea issued a statement late in the evening that the shots were of a traditional type, with a relatively short range and a low altitude.

The military did not disclose further details regarding the shots that were fired.

During the meeting of North Korea’s ruling party, Kim presented the goals to boost North Korea’s military power and defense research to protect the nation’s sovereignty.