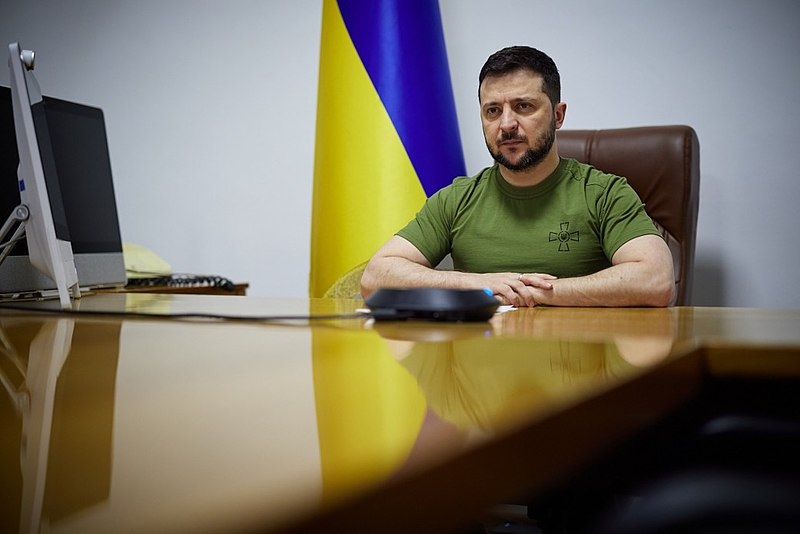 In Russia’s unprovoked aggression on Ukraine, Ukrainians have fiercely resisted the efforts to capture Kyiv and its surrounding regions. With Moscow attacking Ukrainian forces in its eastern and southern territories, President Volodymyr Zelenskyy said he would only talk to Russian dictator Vladimir Putin directly.

Zelenskyy said Wednesday that he is only willing to speak directly to Putin and not through any of his aides, according to Reuters. Zelenskyy cited that if the Russian leader “understands reality,” then there was a way to resolve the conflict diplomatically.

The Ukrainian leader told attendees in his remarks at the World Economic Forum in Davos, Switzerland, that Ukraine will continue to fight until it recovers all of its territories. Zelenskyy also said that Moscow must withdraw its troops from Ukraine completely into its lines prior to the invasion back on February 24.

“That might be a first step towards talks,” said Zelenskyy, who added that the Kremlin is trying to stall its talks with Ukraine.

Zelenskyy also issued an order to end the visa-free travel for Russians who are looking to enter Ukraine. The Ukrainian leader cited that the country’s border security must be improved, especially in the midst of Moscow’s invasion of the country.

To note, Russian citizens are allowed to visit Ukraine without the need for visas. But in an order posted on Ukraine’s presidential website, Zelenskyy said he is in favor of a petition by a citizen asking for the visa-free travel for Russian citizens practice to end.

“Against the backdrop of full-scale Russian aggression, the issue raised is important and vital. I support the need to strengthen controls on the entry of Russian citizens,” said Zelenskyy. Zelenskyy also said he sent a letter to Prime Minister Denys Shmyhal asking to work on the matter.

Last month, Putin signed a decree that would impose visa restrictions on citizens of countries that Russia deems “unfriendly,” which includes Ukraine.

Zelenskyy also dismissed the suggestion that Kyiv gives up some of its territories and provide concessions to Russia in order to end the war. The Ukrainian leader compared the proposal to an attempt to appease Nazi Germany back in World War II in 1938.