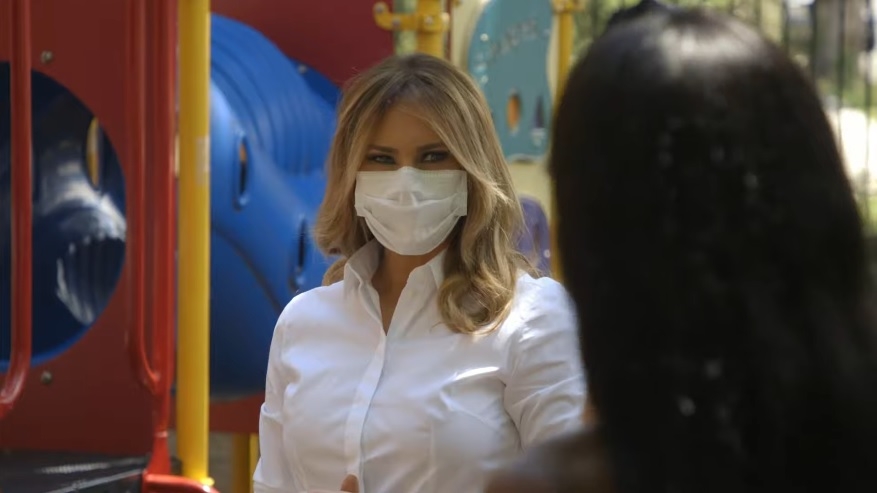 Melania Trump is one of the prominent figures in the White House who had previously advocated wearing a face cover in public. The first lady has rarely been seen wearing a mask during public appearances, but her recent visit to a women’s center in Washington, D.C., was an exception.

Melania Trump wears a mask during visit to women’s center

The White House official YouTube channel shared a brief video Sunday showing snippets of Trump’s visit to The Mary Elizabeth House. The first lady appeared wearing a face mask as she greeted women and children at the center.

Before the 30-second footage ended, the first lady is also shown handing out lunches in boxes printed with the logo of her Be Best initiative. Trump recognized the visit in a tweet saying, “Today I visited The Mary Elizabeth House, an inspiring place & supportive community for young women & children. I met [with] staff, mothers & children, & dropped off boxed lunches & #BeBest items to show my appreciation for their efforts to strengthen families in our community.”

What Melania Trump has said about wearing masks in public

It was Melania Trump’s first public appearance where she was seen with a mask on, but the first lady had been encouraging Americans to wear face coverings in public to slow down the spread of COVID-19. Trump made previous online posts and appeared in PSA videos, where she cited recommendations from the CDC regarding the use of face coverings in public settings where physical distancing cannot always be maintained.

Before she visited the women’s center, however, Melania Trump was rarely spotted donning a mask in public. She, along with Donald Trump, even faced some criticism after attending Memorial Day ceremonies without wearing masks.

COVID-19 cases in the US continue to rise

More states and counties have lifted stay-at-home policies over the past month, but some are seeing a rising number of new COVID-19 cases since. Last week, Florida reported its highest number of new cases in one day of 15,300 on July 12.

The following day, Florida confirmed having another 12,624 new cases bringing the total to more than 266,000, per the July 13 CDC data, in the state alone. Across the United States, COVID-19 cases have climbed to more than 3.2 million and 134,884 deaths.